Ain’t ‘No Doubt About It,’ Pitbull & Jussie Smollett Are Here To Party With Latest ‘Empire’ Earworm 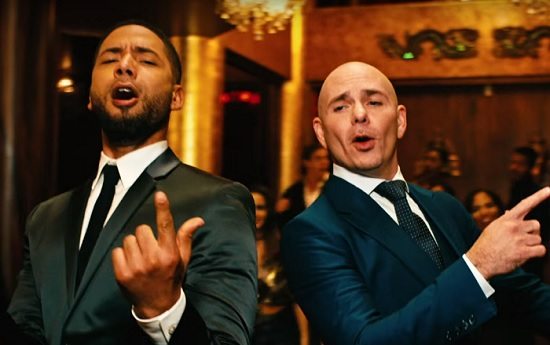 Another week, another earworm from Empire. Last night's episode had its share of musical moments, but one that stood out came when they added ubiquitous Miami rapper Pitbull to the mix to keep things interesting. He comes with "No Doubt About It," a party-starting anthem that aims to have folks moving to the dance floor. To its credit, the song is a pretty catchy affair, especially with its wall of synths and pulsing rhythm. As well, Jussie Smollett fills in the role typically held down by the likes of Ne-Yo (whose signature is all over this chorus) as he lets the crowd know it's time to turn all the way up.

Video-wise, it also another Technicolor Pitbull affair, complete with ladies wearing revealing dresses, its leads suited and booted and a poolside party that goes over the top. It's typical, and perhaps that's why we're a little underwhelmed with it all. To be honest, the music from Empire hasn't been hitting as hard as the first season, and with a slight shift in the musical supervision personnel, the difference in sound and quality is quite noticeable. But we do have to applaud the fact that the musical phenomenon is finally getting a decent enough promotional budget that videos now aren't just a collection of clips from the show.

That being said, it's all still a pretty good time and fun to watch. Turn up with Pit and Jussie when you press play right here.


TAGS:  Empire, Jussie Smollett, ne-yo, pitbull
Previous: The Nth Power Proves That Their Time Is ‘Right Now’ Next: Empire Watch: Lucious Brings The Fire From Heaven As He Plots His Revenge