CeeLo Green Bares His ‘Soul’ On ‘The Tonight Show’ 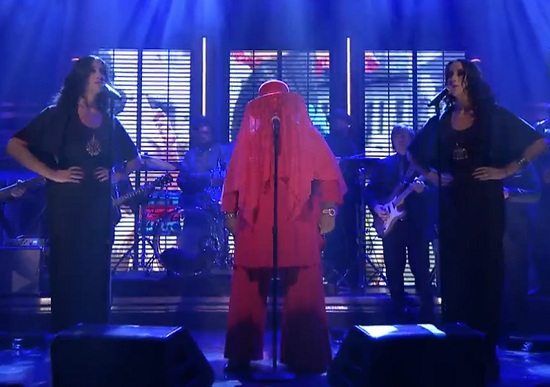 CeeLo Green may have dipped from the limelight for a minute, but he's been making up for lost the time with the push toward the release of his latest album, Heart Blanche. The former Goodie Mob rapper and GRAMMY-winning singer has been giving a full court press, releasing three singles — "Robin Williams," "Sign Of The Times" and "Music To My Soul" — in fairly quick succession. Now, Mr. Green is taking to the airwaves to promote the project.

His first stop is on the stage at The Tonight Show Starring Jimmy Fallon. Dressed to his crimson peak (including a red veil) and backed by The Watson Twins and house band The Roots, CeeLo performed "Music To My Soul" for the audience in studio and at home. It was an arresting performance for sure, with the uplifting track getting a proper rousing performance. Once the song got to a good point of momentum, CeeLo finally removed the veil (but not his signature shades) so he could connect with the audience as he delivered the track's emotional high point.

You can check out CeeLo doing his odd little thing by hitting play below. Heart Blanche, the crooner's fourth solo studio album (fifth if you count his holiday album CeeLo's Magic Moment) will arrive in stores on November 13th.