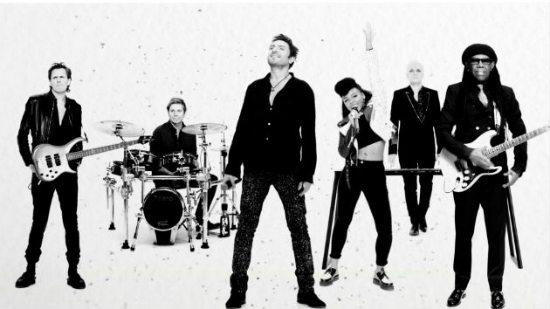 Duran Duran, Nile Rodgers and Janelle Monáe are taking control of our senses again with the visuals for "Pressure Off." The single, released this summer, gets the black-and-white treatment in the video featuring the musicians having a blast. The legendary '80s band — comprised of singer Simon Le Bon, keyboardist Nick Rhodes, drummer Roger Taylor and bassist John Taylor — are joined by Nile as they rock their best black-on-black outfits, complete with zippers, leather and even funky shades. Janelle is just as rocker chic in her black croptop paired with a funky black-and-white leather coat riddled with lyrics. While the group performs, the video is decorated with blotches of ink every so often and we get funky close-ups and cool visual effects to match the funky groove of the track. During the chorus the musicians jump and get suspended in the air as they take the pressure off of themselves in this visual party. Did we mention Janelle's dance moves?

The video ends with confetti, and rightfully so since the group and their funky features delivered a successful single and video. The Nile Rodgers and Mark Ronson-produced single is from Duran Duran's 14th (yes, 14th) studio album, Paper Gods, released this September and available for purchase on Amazon, iTunes and other retailers. The single and video make it quite apparent the British group is here to stay as they look youthful and full of energy. It did help that Janelle danced circles around them to add her contagious flair while Nile provided an extra layer of cool. If you want to experience this super fun video, watch it right here and let us know if it helps you take and keep the pressure off.