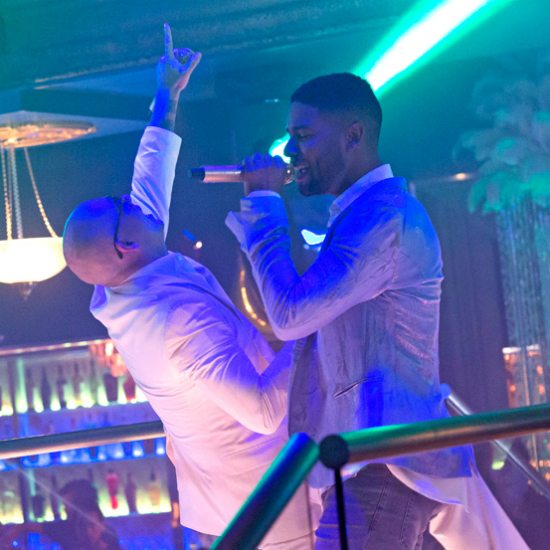 Lucious begins the first phase of his plot to bring down Lyon Dynasty by trying to recruit Anika to his side, scheduling a private meeting at the nightclub, Leviticus. Unbeknownst to Lucious, but obvious to anyone who’s seen Cookie and Anika in the same room for more than five minutes, Anika is no longer part of Lyon Dynasty. Still, Hello Kitty patronizes Lucious and asks what he has in mind.

Back at the Lyon Dynasty offices, Cookie and Hakeem are trying to get Mirage A Trois ready for Sway in the Morning, practicing their song, “Just Do It.” Of course, the girls have much ‘tude and aren’t really feeling Cookie. Hakeem implores his mother to give him as much trust as she gave Jamal. Hakeem then uses his charm to get the girls together. Cookie looks on like a proud mama as Hakeem takes control.

While Cookie and Hakeem are trying their best to make Lyon Dynasty happen, Andre is trying to get back in Lucious’ good graces over at Empire. He meets his father for lunch and begs like James Brown to return to the company. Lucious tells him to pray on it before calling Jamal to help him recruit Freda Gats, the daughter of drug dealer and cannibal Frank Gathers. Unfortunately, the deal falls through when Lucious doesn’t show up at the offices and Freda’s legal team of thugs and ne’er-do-wells can’t read half the words on the contract, which leaves Jamal pissed that his father is giving more attention to someone else over him yet again.

Lucious and Jamal try to discuss their ongoing issues later at Jamal’s apartment, however, the conversation is pretty one-sided as Lucious admonishes Jamal for his inability to be street and recruit Freda to the Empire fold. He had a dream for that girl. Besides getting revenge on Frank Gathers by signing his little girl to a record deal, he was also going to use Freda to revive his Gutter Life Records label.

Speaking of record labels, Anika is over at Lyon Dynasty waiting for Cookie at the door to give her the latest on what Lucious is up to and his plans to steal all their music. Anika then spills the beans to Cookie about the welcome back party Lucious has planned at Leviticus.

The night of the welcome back party, Pitbull and Jamal have the club going crazy with the song “No Doubt About It." That is, until Cookie and her team of thugs take over the DJ booth and Hakeem begins to perform his new song “Dynasty” featuring Timbaland, pretty much talking cash s**t about his father’s company and how they are going to take them down. After Lucious has had enough of Cookie and Hakeem’s shenanigans, he tells his security to throw them out, but not before Pitbull gives Cookie her props for her gutter life moves.