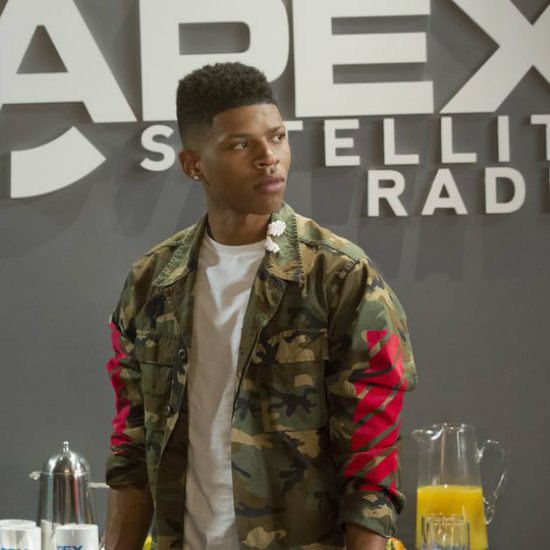 After successfully pulling stunts and shows at Leviticus, the Lyon Dynasty offices are buzzing like Flavor Magazine from Living Single. They’ve got receptionists and interns and even Porsha, Cookie’s assistant, is back  (with blue raspberry Kool-Aid colored hair no less!!!). Unfortunately, Andre is still wall sliding and moping around. His heart isn’t here, it’s at Empire. Cookie tries to talk sense into the boy but sees it’s no use. He then reveals that he and Rhonda are having a baby. Learning that Lucious doesn't know he has a grandson on the way, Cookie talks Andre into using the upcoming child to pull on Lucious's heartstrings.

Unfortunately, the effort backfires. After Andre shares the news with father, Lucious hugs his son, kisses him and then promptly kicks him to the curb for trying to use his child as a bargaining chip. While Lucious is overjoyed about having a grandson, he still can’t get over his son's and his mother’s mental illness. Playing the piano, he flashes back to one of his mother’s manic-depressive episodes, where she celebrates Lucious’s birthday early with a bunch of toys, only to not have any money for food later. Barely able to function, she’s zoned out while Young Lucious sings Minnie Riperton’s “Loving You” to try to snap her out of her funk, going “la la la la, doot 'n doodly doo!” ‘cause his mama is cuckoo.

Moving from one crazy scene to another, Lucious decides to pay Freda Gats a visit on her own turf in the 'hood. Freda is at the playground giving us her best Heather B. impression engaged in a rap battle. When her opponent brings up her father, Freda brings out her gun to bust a cap in his ass and the scene erupts in chaos. However, Lucious manages to talk Freda down from making a mistake. Thirsty then tells Lucious he needs to vacate the scene before he gets arrested.

While shots are being fired across town, Becky and Jamal are shooting the s**t back at Empire, having a heart to heart about why none of the producers he’s worked with are right. Becky pretty much describes each of the producers like she’s Goldilocks (wait a minute), saying this one is too tall, too hot, too cold, before letting him know that Cookie is just the right for dealing with his crazy, eccentric, self-hating butt.

Leaving the scene of the shooting, Lucious and company run into Prosecutor Ford and her gold 1992 Lincoln Continental. She tells him he better watch his back cause she’s got her eyes on him. Lucious pretty much tells her she better close ‘em and that he has his own surprise waiting for her.

Back at the Lyon Dynasty offices, Cookie is doing her best impression of Debbie Allen in Fame meets Abby Lee Miller from Dance Moms in efforts to get the girls together for Sway in the Morning. Porsha's tapping along and wiping sweat off Cookie’s face like she's a prizefighter. After pressing the girls to do push-ups (in sync!!), ol’ girl Valentina says she’s a singer not a soldier. Cookie then tells the girl she better put in the work if she wants to prove that she didn't’ have to sleep around to get a record deal. Hakeem then shows up, visibly impressed by all the hard work the girls have put in. He asks where did Cookie learn those moves from. Cookie simply replies, “Prison.”

Lurking just outside of the Lyon Dynasty offices is Jamal, who has tried to swallow his pride and ask Cookie for her help producing his album. But before he can step one foot in the door, Lucious rolls up in a limo and promises to finally give Jamal the attention he’s been wanting by agreeing to produce his next album.

That's not the only surprise that Lucious has cooked up. As Cookie and Hakeem and the rest of the girls from Mirage A Trois wait impatiently for lead singer Valentina to show up, Lucious comes through to deliver the news that he has not only bought a controlling interest in the radio station, but that he also has a controlling interest in all radio stations. Without radio, the Lyon Dynasty label will dry up and die. While this statement is completely untrue in 2015, it does make for good drama, at least in this episode. The final surprise is that Lucious has signed lead singer Valentina as his new star on Empire Records. ¡Mirage A Trois es no más! But don't cry for the Lyon Dynasty, because as Cookie puts Lucious on notice before she saunters out, you can't keep Cookie down.