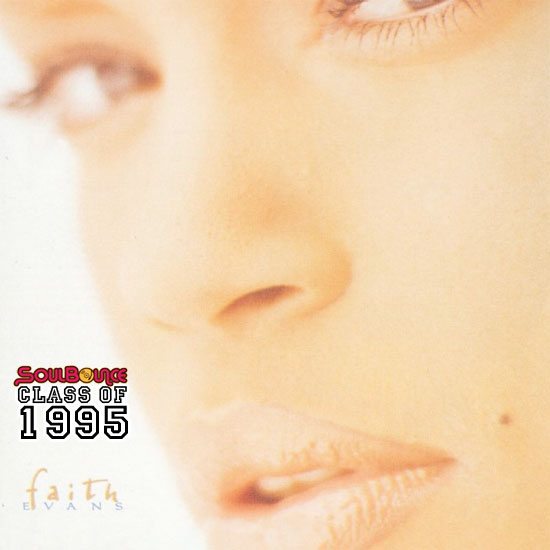 It’s no secret that Sean “Diddy” Combs ruled the ‘90s. While his stronghold on the music world first took hold as an intern with Uptown Records, things really took off once he launched his now-iconic music label Bad Boy Records. Though known initially for the hip hop artists whose careers it helped launch like Craig Mack and The Notorious B.I.G., Bad Boy would grab the ears of R&B fans thanks to the vocal stylings of the roster's first singer, Faith Evans. Initially tapped to contribute backing vocals and write songs for the likes of Mary J. Blige and Usher, Evans quickly proved that she deserved to stand in the spotlight alone with the release of her eponymous debut album, Faith in August 1995.

Besides her tumultuous marriage to the label's top artist, The Notorious B.I.G., Faith quickly became known as the "First Lady of Bad Boy" thanks in large part to her platinum-selling debut. Although she was introduced to music listeners after she sang the hook on Biggie's single, "One More Chance," she proved she could hold her own with the release of her lead single, "You Used to Love Me." Produced by Diddy and Chucky Thompson, the song featured the signature bass-laden groove that came to define Bad Boy's sound. Originally planned for Evans' labelmates Total, she quickly claimed it as her own after hearing the track, making it the first song completed for her album. This proved early on her talent for picking out a hit song. The single would go on to reach the No. 24 spot on the Billboard Hot 100 chart and No. 4 on the Hot R&B Singles chart.

For her second single, "Soon As I Get Home," Evans slowed things down, showcasing her ability to belt out a ballad just as easily as she could take on a midtempo number. Just like before, the song almost didn't happen. After stopping by the recording studio to pass time on his way to the airport, Thompson eventually found himself being thrown into the studio where he laid down the track at the behest of Diddy. Evans would then record her part on her answering machine. According to Thompson, Evans' vocals were so perfect that he did not have to add anything else to it. The result was an understated, smoky number that finds Evans promising to make things right as soon as gets home. Her mea culpa worked, this time with the song climbing all the way to the No. 3 spot on the Hot R&B Singles chart and No. 21 on the Billboard Hot 100 chart.

By the time Evans released her third and fourth singles, "Ain't Nobody" and "Come Over," she had all but cemented her spot as one of R&B music's rising stars. On the latter, Evans showed that she could also take on a seductive role as she enticed her lover over to her place. "Come Over" is another example of the singer's knack for making great recording decisions as the song was initially supposed to only be featured as an interlude until Evans decided to flesh it out into a full song. The topic of love -- the good, the bad and the ugly -- remained front and center throughout the album, while the honey-voiced soprano displayed her ability to take on a variety of styles. Her gospel music roots were on full display as well, with the influence being heard in Evans' vocal delivery throughout the album.

It's no coincidence that Thompson either produced or co-produced nearly every song on Faith. After meeting while she was doing vocal production work on Usher's self-titled debut album, Evans boldly declared that she wanted Thompson to produce her entire debut album. Her artist's intuition paid off, with the album selling over 1.5 million copies by the following March and climbing to the No. 2 and the No. 22 spots on the Top R&B Albums and the Billboard 200 charts respectively. The album also became a bit of a family affair, with Evans drawing help from her Bad Boy labelmates Daron Jones and Q. Parker of 112. Jones contributed background vocals and playing keys, while Parker also contributed vocals.

Twenty years after its initial release, Faith has been able to stand the test of time while aging beautifully. The songs continue to resonate with music fans, with some of the songs taking on a life of its own. For example, although the closing track, "Reasons" was never released as a single (or even intended to be a full song in the first place), it remains one of the album's most revered songs to this day. Since then, Evans has gone on release six more solo albums over the course of her highly successful career. Not bad for a church girl from Jersey who got her start lending her talents to others.