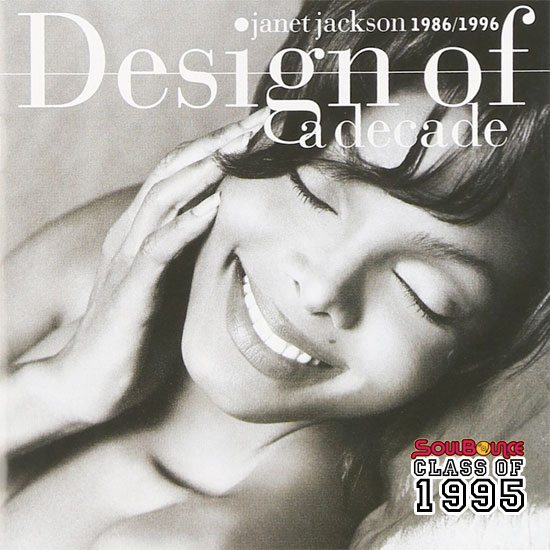 It was 1995, and at the fine age of 29, Janet Jackson was unstoppable. Taking her rightful seat as the Queen of Pop, Janet decided to continue her reign with her first greatest hits album, Design of a Decade: 1986/1996. The first half of the album title was the most accurate about the singer. Janet Damita Jo Jackson went from the shy, bubble-gum popping Gary, Indiana native to a sexy, confident, worldly woman who made it clear never to call her "baby." A part of her royal court were producers and collaborators Jimmy Jam and Terry Lewis, who also doubled as her designers. The duo expertly sketched, outlined and weaved Janet's sound and made her a shining star in the music industry. The latter part of the album title was a little misleading, however. The 14 tracks were Janet's top 40 hits from her albums Control (1986), Janet Jackson's Rhythm Nation 1814 (1989) and janet. (1993) so technically the album didn't quite cover a decade, but what Janet says, goes. The album also featured two new singles, "Runaway" and "Twenty Foreplay," which showed signs that Janet had no plans of slowing down her high-speed train to success.

Described as "state-of-the-art dance-pop productions," most of the singles on the greatest hits album were just that. Catchy, chart-topping songs that defined Janet's career. The lead single and first release from the album was "Runaway," the pop single initially meant to be a duet with brother Michael Jackson. Similar to "Escapade" and "Whoops Now," the single invited you to take a trip with Janet as she explored African and Asian-inspired sounds. The perfect lead-in to an album taking you on a trip, "Runaway" made Jackson the first female artist in Billboard‍ '​s history to debut in the top 10 of the Billboard Hot 100. The second track, "What Have You Done For Me Lately," took us back to Janet's 1986 album Control, where we first got a glimpse of what to expect from the sweet-turned-edgy singer. To reinforce the message, "Nasty" followed as the third track on the album. Here's where Janet expertly instructed us to call her Miss Jackson, it's also where we learned our pop star was a grown woman.

The core of the album featured tracks from Janet Jackson's Rhythm Nation 1814 and other where the icon mixed romance with social consciousness. Janet decided to take the sweeter route and included the sultry "When I Think Of You," the fun "Escapade," the amorous chant "Miss You Much," the endearing "Love Will Never Do (Without You)" and funky single "Alright." Not to be too vulnerable, Janet moved things in the other direction with her more hard-hitting tracks "Control," "The Pleasure Principle," "Black Cat" and "Rhythm Nation;" all timeless singles, which added edge to Janet's wholesome persona. They shed that layer even further by ending the last quarter of the greatest hits collection with the slick and seductive "That's the Way Love Goes," emotional "Come Back To Me" and the ever so pure "Let's Wait Awhile."

Just as it started, the album ended with a new track. The mid-tempo "Twenty Foreplay" served as the second single from the collection and as a reminder that Janet could still be sensitive but sexy with a play on "twenty-four hours" and "foreplay." She went on to supply the track with visuals inspired by the 1950s and Dorothy Dandridge, which was no mistake since she was America's first African American sex symbol and Janet followed in her footsteps.

With Design of a Decade: 1986/1996, Janet Jackson sang her way into the good graces of her fans and critics alike.  The album was certified double platinum and sold 10 million copies worldwide. Not that we needed the reminder, but the compilation was a testament to Janet, Jimmy and Terry's chemistry and amazing work together. In 2015, Janet continues to reign the kingdom with her recent return Unbreakable, where she also reunites with her key designers. Still gracing our playlists today, each song on Design of a Decade is as timeless as Janet herself.