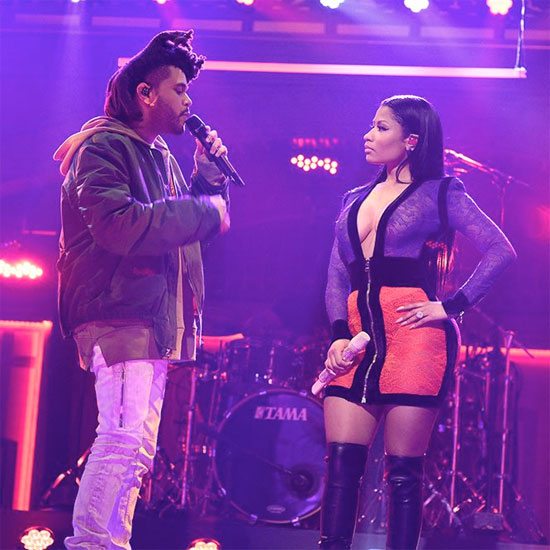 The Weeknd is riding high right now. The Canadian crooner has parlayed his alternative R&B stylings into pop chart success with back-to-back-to-back number one singles. He performed two of his chart toppers on this weekend's Saturday Night Live broadcast. The Weeknd injected a slight bit of entertainment into the increasingly stale show, with performances of current hit "The Hills" and the earworm "Can't Feel My Face."

For his live rendition of "The Hills," the SNL stage was bathed in red lights for the creepy track about creeping. Things didn't get interesting until his remix partner Nicki Minaj sauntered onto the stage after his first verse. She spit some lyrics to match the song's raunch, but then she didn't leave the stage after her verse was done. She served no purpose other than to distract from The Weeknd's tissue paper thin and barely decipherable vocals.

Toward the end of the show, The Weeknd returned sans Minaj to perform "Can't Feel My Face." If you've seen the music video, then you have a good idea of how his stage performance looked. Well, minus the whole him being set on fire thing. But his spastic, rhythmless nation dance moves were on fleek.

Watch both performances below, and if, unlike us, you were feeling these live offerings, then make sure to catch The Weekend on The Madness Fall Tour starting next month.