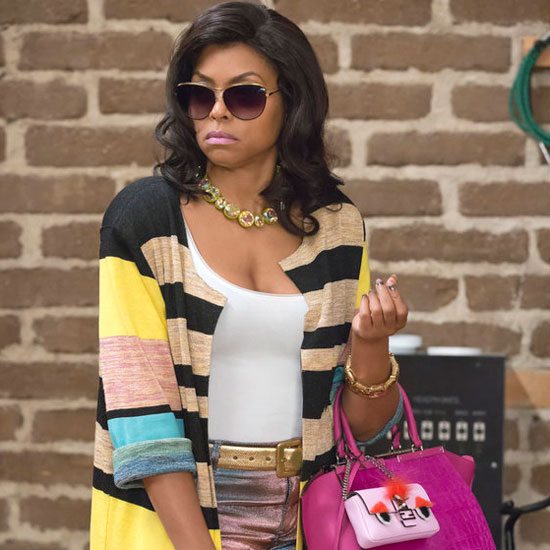 This second season of Empire has been on Team Too Much. We're eight episodes deep, and the plot has had more twists and turns than the Autobahn while being as believable as Ben Carson's claims or Donald Trump's toupee. Yet, it remains our guilty pleasure for as long as we can stand its weekly ridiculousness and in hopes that some of these loose plot points and dangling story lines come together. And on this week's episode more puzzle pieces fell into place while a plausible twist popped up and more drama popped off.

This episode opens up with Lucious and Becky strolling through yet another area of Leviticus that we've never seen (seriously, how big is this club?) and she tries to reason with his unreasonable self that he needs to mend the rift between himself and Hakeem. She asks him to think about it and he does for all of two seconds until he gets on stage to introduce Fantasia Loaf to a congregation of bloggers, vloggers and whatevers hungry for "exclusive" content with a message for his wayward son on the song "Shots Fired." Phones and tablets are recording when the club darkens and the sound of bullets rips through the club (after the terrorist attack that hit a concert hall in Paris mere days earlier, was this the best idea to air?). Freda Gatz emerges on stage and proceeds to read Hakeem for filth in her little rappity rap.

The next day, Hakeem and Laura are chilling in his crib, getting ready to play a game of pool with his balls and cue stick until she puts the brakes all the way on when she reveals that she still has her V-card. Hakeem seems to think that his eggplant's so bomb that Lara will follow him around like a puppy if/when he takes her virginity, and Laura momentarily gets in her feelings until he gifts her with a bracelet that he designed with their initials on it. He then plays the We Can Take Our Time and We Ain't Gotta Rush cards before Laura leans back on the pool table and it looks like she's about to lay it low and spread it wide. Just in the nick of time before Laura's clothes fall off, Hak gets a text that Freda is going in on him. Keem jumps up and goes to his computer where he performs the quickest Google search ever to find video of Freda's shots from the night before that has him seething.

Over at the Empire offices, Lucious has gathered together a boardroom full of suits to watch a new Pepsi commercial starring Jamal. A Pepsi representative is there to explain that Jamal has a great shot at being the new face of the brand, amongst other artists. Lucious isn't feeling the fact that Jamal would be one of many, but his son is just happy to be in consideration and he has a week to get a song together. Lucious is ready to get in the studio to create some hot fire, and Jamal momentarily looks nervous because he knows he's been tipping out on his dad to work with his mom.

After almost falling into a threesome with Lucious and a thot from the club last week, Mimi has fallen back into her senses and is talking business with Papa Lyon and Andre. Mimi implores to them that they need to close the streaming deal with Jago Locke. But after Lucious opened up a can of whoop ass on him, he's in absolutely no rush. Mimi reminds Lu that she has mega millions on the line but Andre counters that the deal could be very costly for Empire. Always the hothead, Lucious flicks off on Jago again and a frustrated Mimi tells him to stop all that big and bad talking or bring a better deal to the table before walking out. Andre stays behind to talk some sense into his father, which hasn't worked yet but hope springs eternal. Dre low key tells Lucious off who doesn't take too kindly to the read but gives Andre his marching orders to holla at Thirsty to dig up some dirt on Jago.

That night, Jamal is at home working on his new song for Pepsi...with Cookie! She's loving what she hears and gives her baby boy positive feedback. They're having a little lovefest until Jamal reminds Cookie that Lucious would kill them if he knew they were working together. Cookie tries to tell him that he has leverage in the situation and to just tell Lucious the truth -- before she does.

Hakeem hops on Periscope at the Lyon Dynasty warehouse to call out Freda Gatz and challenge her to a rap battle and defend his Lyon name. At the same time, Keem's old bae Boo Boo Kitty is in her apartment, staring at herself in the bathroom mirror and boohooing. She has a knife in one hand and it seems as if she's about to end it all when we see her holding a positive pregnancy test in her other hand. Instead of slitting her wrists, she slits the packaging on another pregnancy test open and proceeds to sit on the toilet to pee on the stick, hoping that she passes this particular test, which she doesn't. A distraught Anika calls Hakeem, and he sends her call straight to voicemail and she leaves a message that they need to talk.

The next morning Laz is giving Cookie the blog breakdown of what Hakeem has been up to with his upcoming rap battle with Freda. Cookie's face is all types of twisted when her youngest walks into her office. She questions how he could be dumb enough to let Lucious sucker him into a rap battle, and he questions if Laz was the one who snitched on him, because it's not like it wasn't all over the Internet or anything. Cookie gets into Hakeem's ass about falling for the okey doke, and he blames Laz for feeding his mom's head with stories. Tempers flare in the room, and Hakeem and Laz briefly get into it and into each others faces. Laz pushes Hakeem, but then Cookie raises up to pimp slap the piss outta Laz who she tells to never lay another hand on her son. Cookie turns to Hakeem to get in his ass as well to let him know that he better not lose this rap battle because there's more on the line than his pride.

Cookie decides to have lunch at Jamal's place, but their conversation gets interrupted by an unannounced visit by Lucious that sends her running for cover with her plate. Lucious wants Jamal to hear this hot new track that he's made for him for the Pepsi situation and he's ready to go to the studio to cut the record. As the two of them get ready to roll out, Lucious sees Cookie's ostentatious jacket on a chair and Jamal plays the dumb role like she left it there a while ago. Well played, Jamal.

Anika leaves her house for some nourishment, and she bumps into Rhonda who notices that something is wrong but doesn't press the issue. Rhonda decides to join Anika for a smoothie, the aptly name "Soul Cleanser," and they sit down for some girl talk. Anika notes that Rhonda is barely showing, and Rhonda quickly changes the subject to share how happy she is for the first time in a long time and how Lucious has even come around and is nicer to her since the pregnancy.

Back at the Lyon Dynasty ranch, Hakeem catches Cookie FaceTiming with Jamal and he blows up. Cookie explains to Hakeem that Jamal is on the verge of blowing up with this Pepsi deal and she really wants to help him make it happen. Hakeem rightfully wants to know what about him, though, and threatens to run tell Lucious that Cookie and Jamal are working together. Cookie doesn't take too kindly to Hakeem's snitchassness and pulls his card.