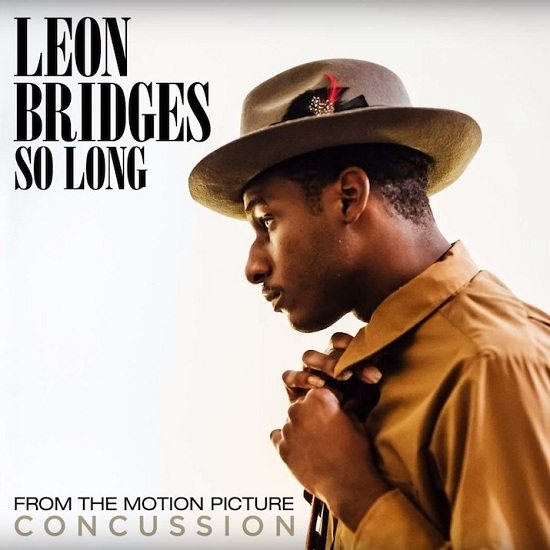 2015 has been a pretty great year for Texan soul singer Leon Bridges. His well-reviewed debut album, Coming Home, was released in June and his soulful chops and throwback style have definitely made him the talk of the music scene. They've also garnered the 26-year-old crooner the chance to tour the world and take on big stages, like he did at last night's American Music Awards, where he performed alongside Seattle rap duo Macklemore and Ryan Lewis. And now, he's even landing songs on major motion picture soundtracks.

Leon's newest single is "So Long," which will appear on the soundtrack for Will Smith's latest film foray, Concussion. While the film itself deals with one man's fight to expose the brain damage that plagues NFL players after they hang up their cleats, Leon's contribution is a tender, heart-wrenching ballad about letting go of love. With its twangy acoustic guitar, bluesy bass and faint organ, it's the epitome of a Motown-era soul slow burner. Leon's dulcet tones, which are paired nicely with the exquisite backing vocals, paint the melancholy melody with a stinging loneliness, yearning and vulnerable honesty that is so rare for R&B in this Auto-Tuned day and age that it's, while obviously a sad song, a breath of fresh air.

"So Long" is available now on iTunes and will be released along with the rest of the Concussion soundtrack on December 18th. Concussion itself will arrive in theaters on Christmas Day. Take a listen to "So Long" right here.


TAGS:  audio, Leon Bridges, Macklemore and Ryan Lewis", will smith
Previous: St. Beauty Takes Us On A Trip In The Visuals For ‘Going Nowhere’ Next: Adele Captivates With Her Vocals On ‘Saturday Night Live’ (And Makes Us Laugh, Too)