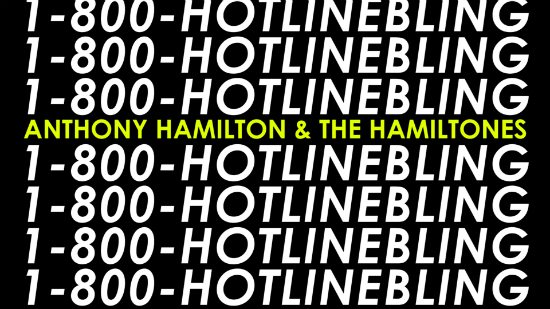 By now, it's no secret that Anthony Hamilton and his background vocalists The Hamiltones can sing anything on and off stage. Whether they're wowing audiences worldwide live in concert, making up a song on the fly inspired by an unlikely viral sensation ("P.O.P. Hold It Down") or taking a current hit song and taking it to church ("Watch Me (Whip/Nae Nae) The #HamFam Version"), these guys are no joke with their vocals. In case you need another reminder, however, we have one right here with this SoulBounce exclusive world premiere of Anthony Hamilton and The Hamiltones performing Drake's "Hotline Bling."

Just when you thought you had heard it all where "Hotline Bling" remakes, remixes and renditions are concerned, you surely haven't heard it like this. In true Anthony Hamilton and The Hamiltones fashion, they took Drake's solo outing and transformed it into a down-home, quartet style song full of harmonies, hand claps and heart as seen in this video recorded backstage before Anthony headlined the Hampton Roads Soul Music Festival in Hampton, Virginia this past weekend.

As showtime approached, Anthony and his band were getting dressed when J.Vito, one of The Hamiltones, broke into song. He started in, "You used to call me on my cell phone," and immediately Anthony and the other signers 2E and Jack "JK" King joined in. The improvised cover of Drake's hit drew the entire band into one dressing room, and in seamless harmony the crew belted out the song. Along the way, they discovered that they didn't quite know all of the lyrics like they thought they did, but they sounded so good it didn't even matter.

Watch Anthony Hamilton and The Hamiltones take us to the First Church Nothin' But The Truth with their version of "Hotline Bling" and join us in anticipating what these talented brothers are going to cover next.