SoulBounce’s Class Of 1995: Brian McKnight ‘I Remember You’ 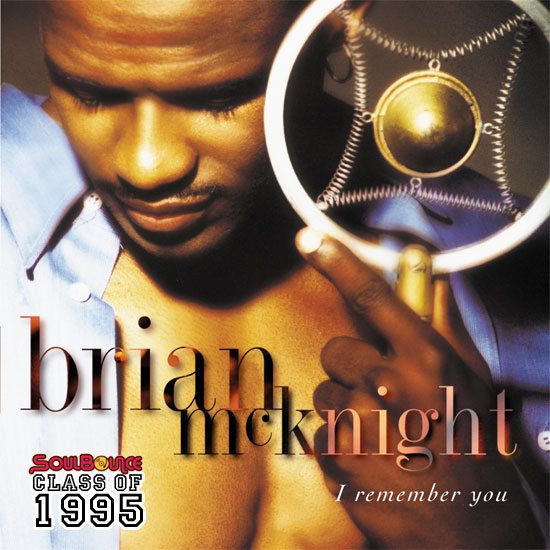 After sliding onto the scene in 1992 with his self-titled debut album filled to the brim with love songs, Brian McKnight decided not to deviate from that course too much when it came time for his sophomore set. That album, I Remember You, was released in the warm, carefree days of August 1995 and it found McKnight spreading his wings ever so slightly yet staying true to his established sound.

Brian McKnight once again flaunted his songwriting, musical and production skills all over I Remember You, but interestingly enough the first single was a cover. McKnight chose to remake and release Van Morrison's 1970 single "Crazy Love," and he took the then 25-year-old track and gave it a soulful overhaul. "Crazy Love" performed modestly on the charts, but it remains one of fans' favorites from Brian's catalog 20 years later.

Other songs from I Remember You have also stood the test of time, namely the slow jams on the collection, but the second single "On the Down Low" shows its age today. But back in 1995, keeping something on the "down low" was all the rage (just ask R. Kelly) and the urban slang for a clandestine affair lent itself to many a lyrical scenario. In McKnight's case, he told the story of a woman named Maxine who pushes up on him and complains about all the things her man doesn't do. The mid-tempo track sounds very mid-'90s and a little dated, but it still manages to hit a nostalgic tone -- even if it's not something that you'd bump on the regular.

However, the album's third single "Still In Love" is a timeless love song that has held up considerably well. The song, co-written by Brandon Barnes, was in McKnight's wheelhouse of sweetness and played to his strengths. He wasn't an oversexed loverman like R. Kelly, a sexy loverboy like Montell Jordan or hot sex on a platter like D'Angelo, who all released albums that year. McKnight was the wholesome husband and father who was at his best when he sang about love, whether he was in it, making it or losing it. Aside from "Still In Love," this could be heard on other songs, such as "On the Floor," "Your Love Is Ooh," "Anyway," "Every Beat of My Heart,""Kiss Your Love Goodbye" and "You."

On those rare occasions that Brian McKnight veered out of the slow jam lane to pick up the tempo, he delivered songs "Up Around My Way" and "Must Be Love" (co-written by Robin Thicke), which were easy R&B listening but easily forgettable album cuts.

Although not a classic album, I Remember You had its bright moments and there was no sophomore slump to be had. Brian McKnight continued to prove that he was a formidable talent and made a solid R&B record that didn't get lost in the mid-'90s shuffle as R&B music was evolving and more artists were coming onto the scene. McKnight laid a strong foundation with Brian McKnight and I Remember You that he is still standing tall on today as he gets ready to release his twelfth studio album in 2016.