SoulBounce’s Class Of 1995: The Pharcyde ‘Labcabincalifornia’ 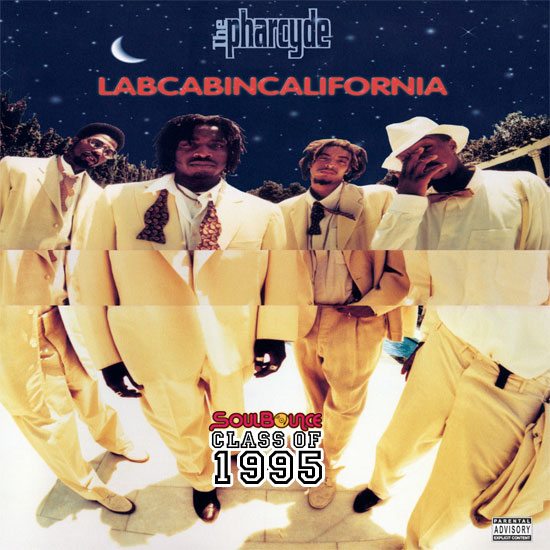 1992 was the coming out year for California-based hip hop quartet The Pharcyde. Their debut album, Bizarre Ride II The Pharcyde, yielded success thanks to the group's unique musical sensibilities and their eccentric take on hip hop. The album went gold and yielded the undeniable hit, "Passin' Me By," elevating the group's profile in the hip hop ranks and placing them on stages with the likes of De La Soul and A Tribe Called Quest. When it came time for the album's follow up, 1995's Labcabincalifornia, The Pharcyde took a decidedly different approach and, in turn, created one of the most underrated classics in hip hop.

Due to a rift between the group and former member J-Swift, the production duties were changed up. Group members Slimkid3, Bootie Brown and Fatlip each took turns producing tracks, with a couple contributions from Diamond D and M-Walk as well. But a good chunk of the production duties were taken on by a young upstart producer from Detroit named Jay Dee, who is perhaps best known these days as the late music legend J Dilla. These changes, of course, created a shift in the group's sound, with a more mature, laid-back vibe replacing the house party-like vibe of the Bizarre Ride II The Pharcyde.

The new direction debuted with the set's first single, The Beastie Boys-sampling "Drop." Buoyed the by liquid-like production that would become Dilla's signature, the innovative track featured verses from three of the group members — Slimkid3, Bootie Brown and Imani — each of whom delivered quick-witted verses that showed that Bizarre Ride was no fluke. To bring the track's feel to life, they tapped avant-garde director Spike Jonze to deliver the breathtaking video. The filming of the clip, which featured them rapping the song while moving in reverse, required them to learn the song's lyrics backward. It was a difficult feat, but one that ultimately paid off, as the clip is to this day often regarded as one of the best music videos ever made. It also helped the single hit No. 5 on the Hot Rap Singles chart and crack the Billboard Hot 100 with a peak position of No. 93.

The set's second single, "Runnin'," also resonated. It found the crew speaking on the trials and tribulations of life, from childhood to their newfound fame, and how, rather than turn tail, they face their problems head on. While the rap's are on point as usual, it's another occasion where Dilla's expert production skills help make the song successful. The seconds-long snippet of bossa nova tune "Saudade Vem Correndo" he flips with elements of other songs is still, to this day, consider a work of musical genius that only could've come from the producer.

While the two singles are perhaps the best known of the album's songs, they were exemplary of the quality of Labcabincalifornia as a whole. Devoid of the obvious party starters of Bizarre Ride, the album consisted of a more mature sound all around, with jazz and soul samples (as well as a few flips from the catalogs of their hip hop contemporaries) supporting more introspective rhymes. But that's not to say that they completely changed their formula. The group's ability to make each song an interesting collection of stories around a theme remained, with tracks like "Groupie Therapy" and "She Said" finding them telling tales of picking up and meeting women and album closers "Devil Music" and "The E.N.D." contemplating the evils of the world.

The change in sound didn't do much to help the sales of Labcabincalifornia, though. It failed to live up to the commercial expectations of their label, Delicious Vinyl, as the album couldn't reach gold status. As for the group, tensions among them grew in the album's wake. Disagreements between Fatlip and the other members resulted in his departure and the remaining three members  wouldn't release another album until 2000's ill-received Plain Rap. Eventually, another group member, Slimkid3 went solo under his given name Tre Hardson, and the group would release the last Pharcyde album to date, Humboldt Beginnings, in 2004 with original members Bootie Brown and Imani along with two new recruits. Since then, aside from a few piecemeal reunions throughout the years, much hasn't been seen or heard from The Pharcyde.

Meanwhile, the legacy and legend of Labcabincalifornia only grows with each passing year. In many ways ahead of its time, the album served as an omen of things to come in hip hop. The soundscape crafted by Dilla would be embraced by hip hop lovers on both coasts and would come to be heard in songs from both the underground and mainstream, birthing a new current in the genre that would run counter to the rise of gangsta rap. Because of this, the album stands the test of time and sounds just as (if not more) fresh today as it did 20 years ago.