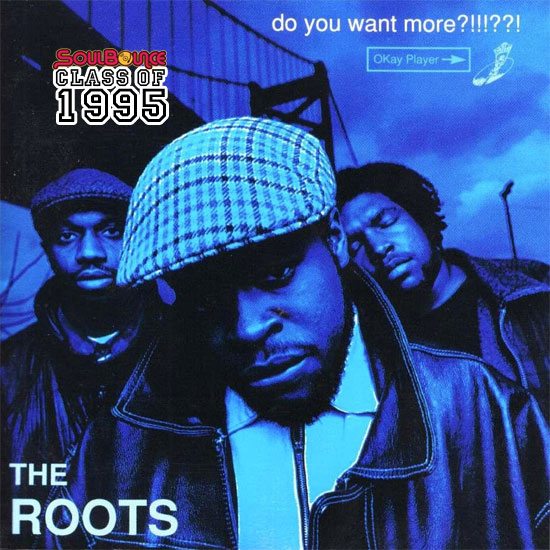 In a reflective interview featured on Okayplayer to the commemorate the 20th anniversary of their major label debut, Do You Want More?!!!??!, The Roots reminisce on one of their first performances in their Philadelphia hometown at a neighborhood strip club in a rough part of town. Let's just say that things got off to a rough start.

"We walked into Prince's Lounge and they laughed at us like we were Arrested Development outtakes," Ahmir "Questlove" Thompson recalls, laughing as he describes the Birkenstocks and argyle socks he happened to be wearing that night. "We were never photogenic," Tariq "Black Thought" Trotter adds. Appearances aside, the band went on to win the night's event.

Fast forward nearly 20 years later and it’s a safe bet that The Roots not only earned the respect of the audience in attendance that night, but also of the collective public. They became household names when they were tapped as the house band for late night talk show host Jimmy Fallon for both his Late Night and current The Tonight Show gigs. Armed with a much more polished image (no more Birkenstocks for Questo), a catalog that includes 11 studio albums total in addition to three collaborative albums and the means to reach an even broader audience, The Roots have undoubtedly come a long way since their humble beginnings.

When the group first dropped Do You Want More?!!!??!, the collective stuck out like a sore thumb. While there had been groups that had infused hip hop with jazz leanings, never before had there been a full-fledged hip hop band. After making waves with their independently-released debut Organix and earning themselves a label deal in the process, the band which featured a then-unknown Scott Storch, kicked off the new year right with the album’s January release date. For those like myself who hadn’t been privy to Organix, this would be my first introduction to the group’s brand of hip hop and what a welcomed introduction it was.

Coming through at a time when the genre was mostly dominated by either New York City or California acts, The Roots easily set themselves apart from their counterparts thanks to their unique sound that could at times take on the vibe of an improvisation session. As a jazzhead, I could appreciate the technique and instrumentation put forth in songs like the album’s stark and gritty lead single, “Distortion to Static.” However, the writer in me was totally here for the lyrical tag team between Black Thought and Malik B.

The two continued trading verses on with the next single, “Proceed,” a bouncier number that further earned The Roots crew an ever-growing fanbase. The group garnered further acclaim with the release of the third and final single, “Silent Treatment,” showcasing that they could also tackle matters of the heart. Rounding out the album, they enlisted the help of fellow Philadelphians poet Ursula Rucker and frequent collaborator Dice Raw on “The Unlocking” and “The Lesson Pt. 1,” respectively. They also pulled in the lovely stylings of jazz singer Cassandra Wilson for the dreamy “Swept Away.”

Revisiting the album 20 years later, it has stood the test of time, effortlessly shrugging off the dated sound that struck many albums from that time period. The only noticeable difference is within the group members themselves, with each video showcasing each man in all of their baby-faced glory. In addition to finally garnering the mainstream success that has eluded so many musical artists, The Roots have aged gracefully while trading in that baggy gear they rocked in the beginning for tailored suits. They have also succeeded in creating music that has grown up right along with them, the raw, unpolished edges giving way to slick productions that still manage to stay true to their original (no pun intended) roots.

While they have endured record label and multiple personnel lineup changes, there's no denying that the hardest working band in showbiz has persevered and come out on top. Between their steady gig on The Tonight Show Starring Jimmy Fallon and maintaining a busy touring schedule, The Roots are showing no signs of slowing down at all.