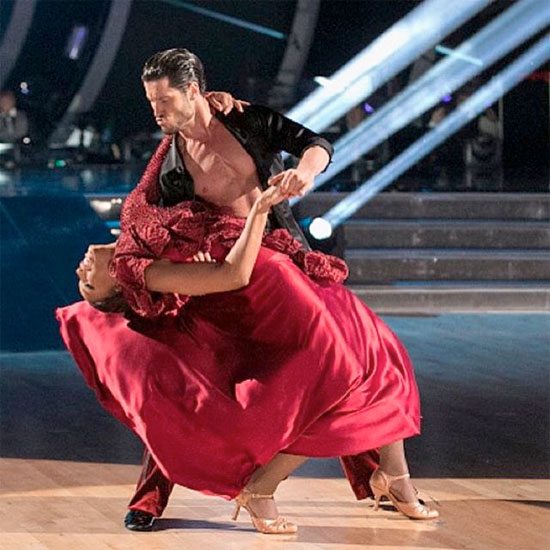 On last week's Halloween episode of Dancing With the Stars, the judges tried to break Tamar Braxton's spirit with sketchy critiques and the lowest scores of the night. But on Monday night's episode, they had no choice but to change their tune after Tamar and her partner Val Chmerkovskiy clocked in a delovely Paso Doble. For the Inspirations Week, Tamar found her inspiration in her older sister Toni Braxton, and she and Val danced to Lady Gaga's "Born This Way." The song choice was a nice touch not only given Tamar's lineage but to let everyone know that she is who she is, knows who she is and is proud of who she is, so deal with it. Braxton channeled her confidence into an almost perfect routine that was made extra dramatic by her flowy red dress that was revealing when necessary. When it came time for the judges to score her, they got some act right and she danced away with 28 out of 30 points, giving her the second highest marks of the night.

Tamar and Val's Paso Doble wasn't their only performance of the night, when they later had a dance-off with Alexa PenaVega and her professional partner Mark Ballas. Each couple went head-to-head on the dance floor dancing the Cha Cha. Tamar and Val definitely had more flavor, and two judges chose them as the winners. Ultimately, the public voted for Alexa and Mark, and they got two extra points added to their score, which will come into consideration next week. We'll see how this all plays out, and if Tamar continues to slay her way through the competition.