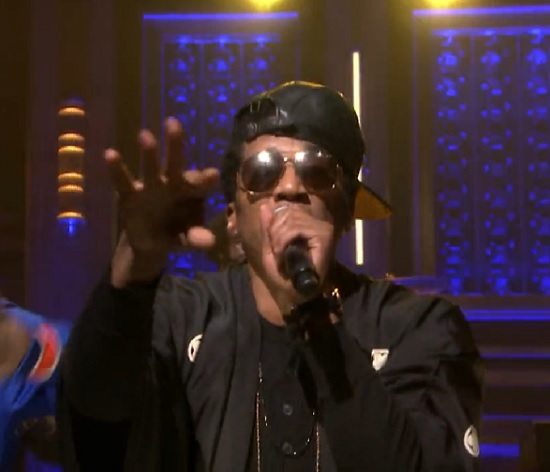 A Tribe Called Quest celebrated a milestone on Friday with the release of the 25th anniversary edition of their classic debut album People's Instinctive Travels and the Paths of Rhythm. While the release itself, which features three new remixes of classic tracks, is a momentous occasion, how the seminal hip hop group decided to celebrate the moment was even more special. All four original members — Q-Tip, Phife Dawg, Ali Shaheed Muhammad and Jarobi White — took the stage on The Tonight Show Starring Jimmy Fallon to rock the crowd with their hit "Can I Kick It?" one more time.

The set was the first time all the members appeared on television together in 15 years, but it seemed that they hadn't missed a beat. While the entire crew are much older than the young men they were when their debut dropped, they tore into the track with the gusto they had back in the day. Q-Tip started the performance by getting the in-studio crowd up on their feet and answering the song's titular question with "Yes you can!" as The Roots and Ali Shaheed Muhammad dropped the beat. Tip and Phife traded their verses while Jarobi played the perfect hypeman, making it feel a lot like 1990 all over again.