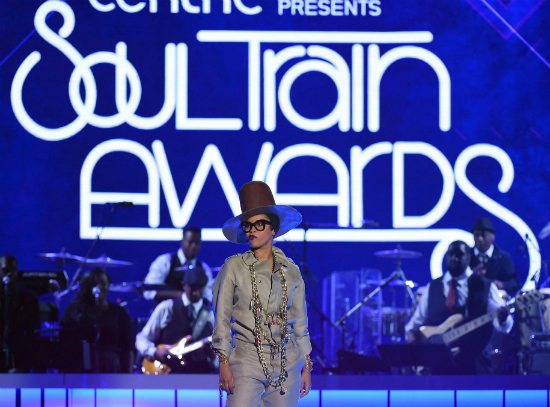 The Soul Train Awards 2015 are in the books, and it was once again one of the best awards show of the year and a glorious display of Black Excellence. What made the Soul Train Awards so good this year weren't the awards that were given out -- the nominations were sketchy from the start and the actual awards bestowed on air were few -- but you can always count on these awards to provide some great live performances by R&B and soul artists past and present. The addition of Erykah Badu as host was a stroke of genius and added another layer of dopeness to the proceedings. With all this greatness to be had on the Soul Train Awards 2015, we had to break down the top moments from the telecast that had us singing, dancing, shouting and all the way lit on social media.

Now, before you go looking for them, what you won't find on this recap of the top moments is any mention of Jeremih or R. Kelly. Jeremih's performance was a waste of good airtime that could have gone to artists who we actually cared about and wanted to see. R. Kelly's finale was basically him wearing a white short set after Labor Day and singing his latest variation of "Step In the Name of Love." If you're a Kells fan, bless your heart, but if you've seen one R. Kelly performance you've seen them all and we're pretty much over his shenanigans.

With that said, click through to see SoulBounce's picks for the 10 Reasons Why The Soul Train Awards 2015 Was Must See TV For R&B And Soul Music Lovers and relive the magic.