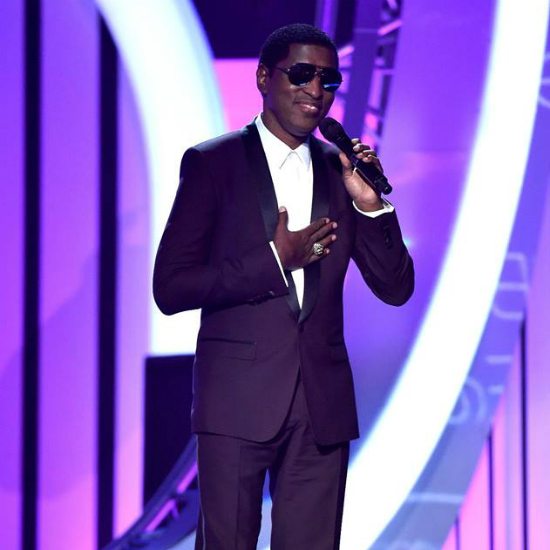 The Soul Train Awards are typically the place to go to honor our R&B and soul music legends, and this year's Legend Award went to the extremely deserving Kenny "Babyface" Edmonds. The award was presented by former bandmate and business partner L.A. Reid who had nothing but love for Babyface. A video montage followed with Toni Braxton, Benny Medina and even Perri "Pebbles" Reid showing him more love.

Babyface came up to accept his award and after his acceptance speech, he sat down at the piano to perform a medley of songs that he wrote and produced. In case you thought he'd perform them by himself, you thought wrong. Tevin Campbell was the first one out the gate to sing "Can We Talk." Father Time has been kind to Tevin who still looked youthful even if his voice exhibited a little age. He exited the stage and Brandy entered with a group of dancers who joined her to perform "Sittin' Up In My Room" from the Waiting To Exhale soundtrack. She even rocked a braided 'do as a wink and nod to that era of her career. Staying on the Waiting To Exhale soundtrack, Babyface was joined at the grand piano by Fantasia who looked ravishing in a red gown with a slit up to her pocketbook while she sang "Exhale (Shoop Shoop)" made famous by Whitney Houston. Tasia did Whitney justice and although Karyn White is still alive and kicking, she then sang "Superwoman" and took it to church with a rousing version full of hollering, squalling and Fantasia-ing.

Then it was time for The King of R&B to come through, and we got Bobby Brown who trotted on stage to lots of fanfare. Unfortunately Bobby couldn't keep up and was a little winded singing "Roni," but Babyface stepped down from the piano to help him out. Babyface strutted off stage and gave Boyz II Men a high-five as they strutted on. Nate Morris, Shawn Stockman and Wanya Morris brought the house down with rousing renditions of "I'll Make Love To You" and "End of the Road." Wrapping it all up was the man of honor himself with a performance of "Whip Appeal" flanked by two dancers (one of which was Laurieann "BoomKack" Gibson) and looking like a musical mack daddy.

These few songs performed barely scratched the surface of Babyface's catalog as a singer, songwriter and producer, but gave everyone who may have forgotten how he ruled R&B in the late-'80s and throughout '90s a much-needed reminder.