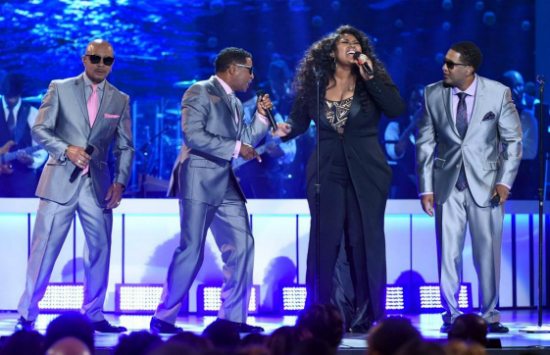 5. Jazmine Sullivan Burned It Up With After 7

Although she was egregiously overlooked when it came to the Soul Train Awards 2015 nominations, Jazmine Sullivan made sure to make a big impression during her performance. On a night where Babyface was being honored with the Legend Award, she thanked him for his contributions to music during a short but sweet speech. As a tribute to Babyface, she sang her track "Let It Burn," which samples After 7's "Ready Or Not," which he co-wrote and co-produced.

Flanked by two background singers, Sullivan honeyed vocals sounded superb as always, but then the big surprise came when she introduced After 7 themselves. Led by Kevon Edmonds, the trio strolled out on stage to sing their 1989 hit. Jazmine fell back to give Kevon and crew their space to shine and they sounded as good as they did back in the day. The Soul Train Awards audience was on their feet singing along to every word and grooving to this Quiet Storm classic. Jazmine chimed back in on the bridge and their harmonies sounded angelic. If After 7 and Jazmine Sullivan ever decide to remake "Ready Or Not" after that performance, no one would be mad.