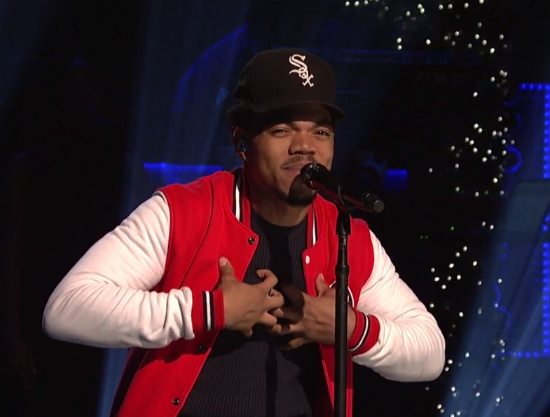 Chance The Rapper made history this weekend after performing on Saturday Night Live. You can stamp his appearance as the first time an independent artist served as a musical guest in SNL's 41 years of existence, and the Chicagoan showed and proved during his two sets. Speaking of firsts, he also debuted his latest track, "Somewhere In Paradise" featuring Jeremih and R. Kelly. Performing the track sans his Chicago brethren Kells, Chance held it down with infectious energy and Jeremih chimed in right at the tail end. The uptempo track got a little help with a full band, including a mini-choir on background vocals and skilled horns to add that extra element to the single.

During his second set, Chance gave us a soulful rendition of "Sunday Candy" from his album Surf with Donnie Trumpet & The Social Experiment. Decked in his Social Experiment letterman jacket, Chance slowed the track down a little, allowing the choir to truly shine as they supplied Chance's track and the Studio 8H audience with perfectly timed harmony.

Chance's debut on SNL was well received, to the point where Forbes is wondering whether he's the new captain for indie artists. His last mixtape, Acid Rap, launched him onto our playlists back in 2013, and his Surf LP with Donnie et al. has kept him on repeat. You can get Surf over on iTunes and watch Chance's SNL performances below. If you're moved to find out what Chance's paradise sounds like in the studio, you can listen to "Somewhere In Paradise" over on SoundCloud and let us know if you'll be rocking with him and his crew in 2016.