Missy Elliott Gets Dance Tribute At Billboard Women In Music 2015 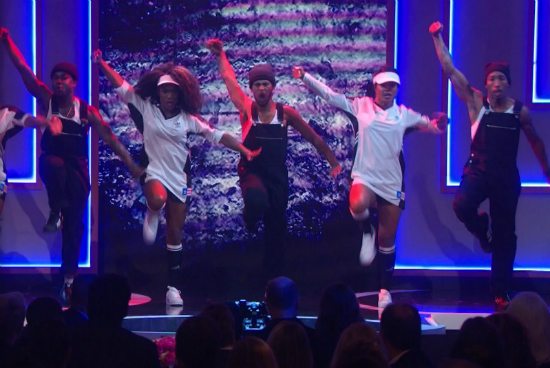 It's no secret that Missy Elliott is by far one of the most iconic artists of our time and with her recent return to our playlists and our hearts this year, it made all the sense that she accepted the Innovator honor during the Billboard Women in Music 2015 awards ceremony. During the ceremony, a troupe of dancers performed a tribute to Missy, giving us a two-minute medley of some of her biggest hits. Three male dancers kicked off the tribute with a routine to "The Rain (Supa Dupa Fly)," equipped with their umbrellas and super fluid moves to accompany the 1997 hit song. Next up, female dancers decked in Adidas gear, rocked "Gossip Folks" with the help of a pig-tailed little girl dancer. The entire dance troupe banded together to perform a break dance-heavy routine for "Work It," while Missy nodded her head and watched in approval.

The party continued with a synchronized routine for "Lose Control" and closed perfectly with "WTF (Where They From)," which ended with the dancers on the floor and Missy grinning from ear to ear. While two minutes is definitely not enough to showcase the amazing talent that is Missy Elliott, the dancers did a great job channeling her infectious energy and unique moves on the Billboard stage. Watch the tribute right here (good luck in sitting still), and let us know if the dancers did Missy Elliott and her iconic career justice.