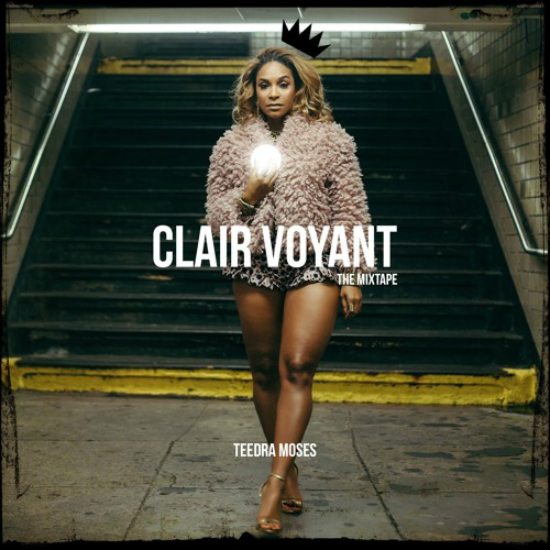 On December 17th Teedra Moses celebrated her 40th birthday, and not only did she join the #40FINE club but she decided to give fans the best birthday gift of all with the surprise release of a new mixtape entitled ClairVoyant. Well, maybe it wasn't a total surprise as she did give everyone notice on social media about the day and time it was dropping, but after the release of her well-received sophomore album Cognac & Conversation this summer, this was the last thing anyone expected.

Teedra is no stranger to releasing mixtapes over the years -- we've lost count on how many are in our collections at this point -- but, after a thorough listen, ClairVoyant may just be her best one yet. Combining unreleased originals, remixes, covers and even relevant sampled dialogue from films, ClairVoyant is the jam from beginning to end featuring Teedra Moses' signature street but sweet style throughout.

Teedra's voice floats in on the brief first track "Is She Talented (Intro)" over a ragtime rhythm that includes a dialogue sample that asks the question, "Do you think she's talented? Deeply and importantly talented?" If the characters were referring to Teedra, then the answer would be a resounding, "Hell yes!"

The second track "Don't Call No More" is Teedra's spin on Drake's "Hotline Bling" from the point of view of the woman who left him on the curb. Moses breaks down like a fraction her exact reasons why she kicked him there and lets him know that she's got a new man. #sorrynotsorry

Following are more refixes like "Flashing Lights," Teedra's flip of Kanye West's song of the same name that she turns into a duet with her background singer J. Black. While "Be Happy" is a mind-blowing mashup of Mary J. Blige's "Be Happy," Fugee's "Fu-Gee-La" and Brownstone's "If You Love Me."

Sprinkled on ClairVoyant are some original cuts like the candy coated R&B of "Radio" that leaves Moses waxing nostalgic about wanting to hear good music on the radio via different scenarios. "You're So Different" revisits Blige's catalog with a sample of "My Life" and sees Moses showing love to her new love who isn't like the "f**kboys" of her past. "Make It Beautiful" is a wistful song about trying to find a happy place in life. It's mostly a piano-driven ballad before it sheds that coat and slips into a sexier outfit on the chorus with house rhythms beckoning you to the dance floor. This track would have made a great sister song to Cognac & Conversation's electronic star "Skin Diver."

Teedra ends ClairVoyant with one last gem, a true to form remake of Sade's "Stronger Than Pride." Accompanied by a prominent guitar, bass and drums, Moses makes magic on "Stronger Than Pride" with a version that showcases her honeyed vocals and makes you believe what she's singing. Her giggle at the song's end gives Janet Jackson vibes and is a lovely touch that will leave you smiling after everything you've just heard.

The first 10 tracks of ClairVoyant are all Teedra, but the Young Lioness gives some shine to a few cubs on the project with three additional hip hop tracks at the end of the mixtape from twin sons Ras Austin and Taj Austin and fellow rapper Rio Loz. Ras and Taj clearly follow in the footsteps of their father Ras Kass and have some flows. It was sweet of Teedra to give her sons plus one a spotlight on her mixtape, but the tracks sounded tacked on and didn't exactly flow with the rest of the project. Nonetheless, ClairVoyant is a hot mixtape overall and one that solidifies Teedra Moses' place on the list of 2015's best R&B acts.