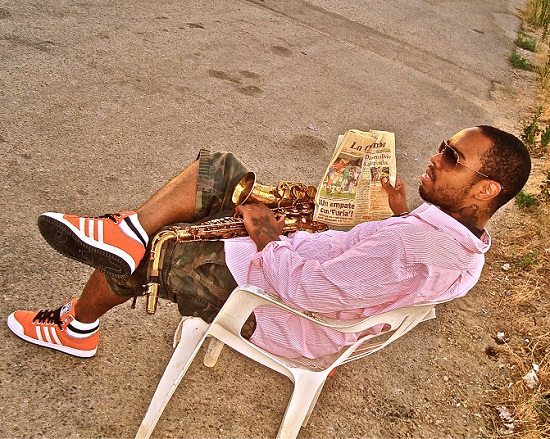 Kendrick Lamar's To Pimp A Butterfly is one album that has been on everyone's lips for the majority of the year, with the set racking up numerous GRAMMY nominations, including Album of the Year. One of Kendrick's key collaborators, Terrace Martin, was instrumental in creating the album and has offered his sax-tastic take the album's biggest single, "Alright."

Though Terrace wasn't involved in the production of the original (those honors went Sounwave and Pharrell Williams), his soulful alto sax was part of the banging track's DNA. He expands on that in his version, which he's titled "Alright (11)" — perhaps as a nod to Kendrick's 11 GRAMMY nods,  mixing his sax riffs with Kendrick's raps quite seamlessly, creating a slightly lazy, hazy take on the track's celebratory feel. And though most of the song's verses don't make it into this mix, Terrace's changes along with Pharrell's triumphant chant makes it all, well, alright.

As for why he felt the need to further put his mark on "Alright," Terrace told The FADER, “I wanted to do this remix as my part to continue to push the message of love and to celebrate change! My only goal with all my music is to help and spread good vibes. I’m just happy we are helping to push a positive energy around the world."

If you want to get in on the good vibes, all you have to do is press play.


TAGS:  audio, kendrick lamar, pharrell williams, Sounwave, terrace martin
Previous: Regina Belle Returns To R&B With ‘Be Careful Out There’ Next: Butcher Brown Have A ‘Very’ Special ‘Holiday’ Treat For You