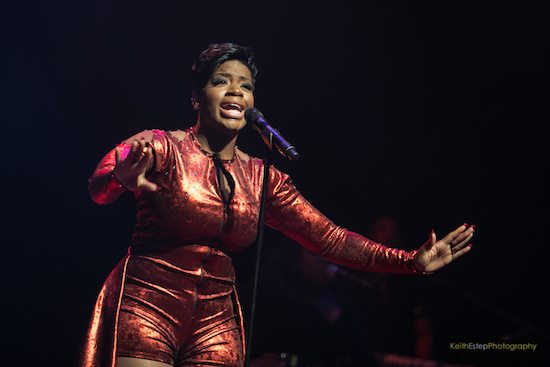 We've been eagerly awaiting Fantasia's follow-up to 2013's Side Effects of You since her scene stealing performance on the 2015 Soul Train Music Awards. Mrs. Barrino-Taylor pretty much snatched wigs and took names covering Whitney Houston’s “Exhale (Shoop Shoop)” and Karyn White’s “Superwoman” during the Babyface tribute. Many of us were ready to put down good money for a new ‘Tasia album right then and there. Striking while the iron is still “warm,” the American Idol winner has released her new single, “No Time For It,” an empowerment anthem for everyone on their "new year, new me" swag.

On “No Time For It,” Fantasia warns gossipers, ne’er-do-wells and all other Negative Nancys to keep their distance over an alluring mid-tempo beat of synths and snares courtesy of producer Brian Kennedy. Here, we find a resolute Fantasia cooly but firmly singing, “I don’t care for gossip / What they gonna say, just got off the plane / I’m strictly focused on commas and dollar signs in my pockets.” Okay, Fanty! We see you.

“No Time For It” is the first single from Fantasia’s upcoming untitled fifth album, which the artist has described as “rock soul,” which isn’t a genre of music, but a blend of “all music and those who love it.” While that might leave us with more questions than answers about what Fantasia has in store for us, we know that our girl has the pipes to pull off everything from a backwater gospel record to a cover of The Rolling Stones "Paint It, Black" to iTunes' Terms and Conditions, so we have nothing to worry about. You can check out “No Time For It" Below and purchase the single on iTunes now.


TAGS:  audio, babyface, brian kennedy, fantasia, karyn white", The Rolling Stones, whitney houston
Previous: Jidenna Brings Back The Jazz Age In ‘Knickers’ Music Video Next: Syleena Johnson To Share How She Transformed Her Body & Life In New Book ‘The Weight Is Over’