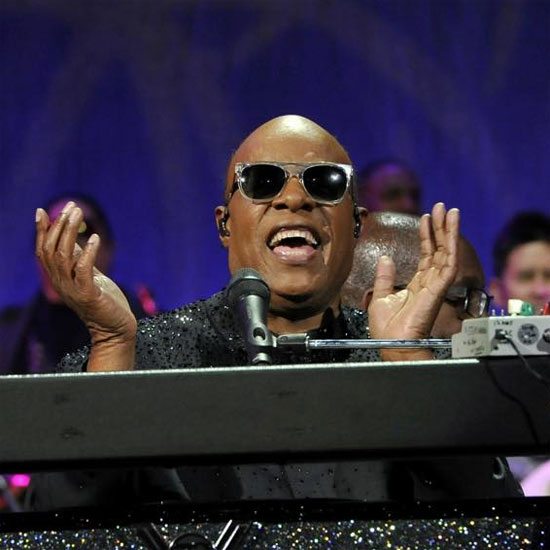 Let's face it, after 50 plus years in the biz, 30 albums, 25 GRAMMY Awards, an Academy Award, inductions into the Rock & Roll Hall of Fame and Songwriter's Hall of Fame and countless other accolades and achievements, Stevie Wonder ain't got a damn thing left to prove. And though it's been 10 years since he last released an album (2005's A Time To Love), at this point he could easily retire, spending the rest of his earthly years relaxing with his growing family and enjoying the fruits of his exceptional career; no one would blame him. But then he shocked and slayed us all with his Songs In the Key of Life Performance Tour, an extraordinary experience that blossomed from a few surprise "pop-up" performances to an extensive year-long tour that wrapped this past November. So, yeah...about that retirement? Fuhgeddaboudit, 'cause now we're jonesing for another album. And we'd like it this year, please and thank you.

Now some of you may think we're asking too much of the 65-year old, especially after coming off a wildly successful and grueling tour. But hear us out, and you just might agree that this request isn't completely unreasonable. For starters, this is Stevie Wonder we're talking about. We have no doubt that he's more than capable of churning out some incredible originals. But there are other options. Let's take into account the sheer volume of his current catalogue. With 30 albums under his belt, he's bound to have a vault full of songs that never made it onto these records. Not to mention the planned projects that have never been released (i.e. the David Foster-produced When the World Began and Ten Billion Hearts). Having been inspired by the energy of the crowd during this last tour, we're sure he could revisit some of these unfinished works and turn them into a masterpiece.

Speaking of the tour, another option would be for him to release a double-disc live album featuring performance highlights from each city along with a companion DVD. This worthwhile compilation would be a welcome treat for those who missed out on the once-in-a-lifetime event, as well as afford concertgoers the chance to relive one of the greatest experiences of their lives.

Lastly, he could take a page out of Frank Sinatra's and Tony Bennett's playbooks (both of which he appeared on) and record a duets album that showcases legendary voices and burgeoning talents. Stevie has recorded several memorable duets in the past with a mind-boggling number of diverse artists. Just imagine the awesomeness that would ensue with his own hand-picked group of collaborators. We can imagine stunning pairings with long-time colleagues like Chaka Khan and Aretha Franklin as well as more recent friends Sheléa Frazier (who recently toured with him as a background singer) and Andra Day, who's already joined Wonder in song for a remake of "Someday at Christmas." The clock is already ticking on 2016, so only time will tell if our wish will be granted this year. But new album or not, Stevie Wonder will remain a timeless treasure in our hearts. -- B. Cakes