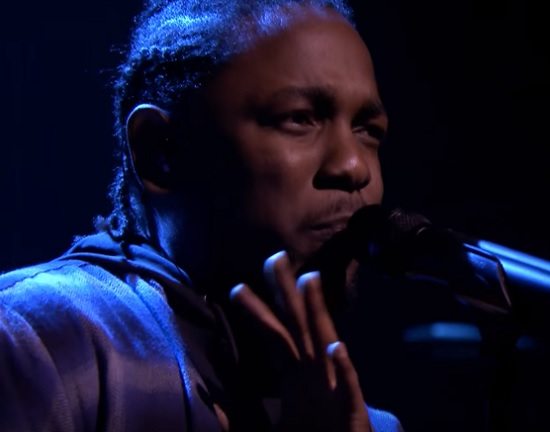 When Kendrick Lamar hits a late night stage, it's always an event. That's because K. Dot's performances are wildly unpredictable in the best way possible. Sometimes he performs one-off songs that leave us begging for official studio versions (like he did on The Colbert Report) or he delivers performances that overshadow that show itself (like he did on Saturday Night Live) or electrifying medleys (like he did on The Late Show With Stephen Colbert). Last night, he kept up the tradition with a performance of yet another untitled track while making a stop at The Tonight Show Starring Jimmy Fallon.

First, Kendrick sat down with host Jimmy Fallon for a candid chat about his career, To Pimp a Butterfly and his record-setting 11 GRAMMY nominations — the most for any rapper at one ceremony. After explaining why he's satisfied with just 11 and would in no way would ever want to surpass Michael Jackson's historic 12 noms for Thriller, it was time for K. Dot to take the stage. Bathed in blue light and backed by his band, the rapper launched into the new track with gusto. It started with a laid-back R&B vibe as he spit lyrics ever so spryly. But the song soon shifted, morphing into a stuttering hip hop beat as the rapper's cadence changed before erupting into a gospel-like finale as Kendrick's voice changed from rap to roar.

Needless to say, we'll also be wanting a studio version of this untitled track as well. You will too once you check out the clip right here.