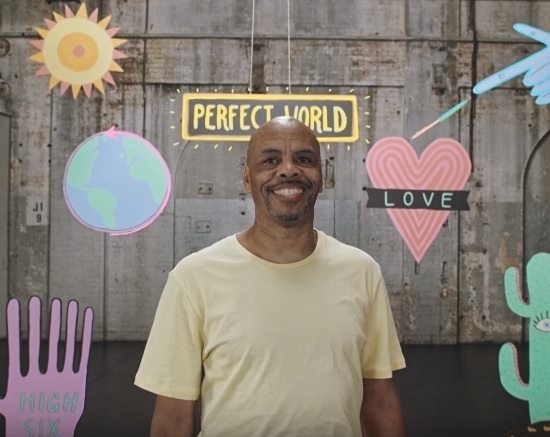 Allen Stone had a pretty good 2015 with the release of his album Radius and he's looking to continue that momentum in 2016 with the set's upcoming deluxe re-release on March 25th. But before that drops into our laps, Mr. Stone treats us to a brand new video for Radius' opening track "Perfect World."

Allen himself doesn't appear the video. Instead, a kooky cast of characters help bring the song to life. We're first introduced to the song as the lead dancer looks around at the odd animated signs around him. His confusion soon turns to sheer joy as he breaks out into an infectious boogie. Soon the colorful animations aren't the most animated things in the clip, as he's joined by a host of others who dance and celebrate the song's peaceful and positive message.

In addition to the video for "Perfect World," Allen also released "Voodoo," one of the seven new tracks to be included on the deluxe edition. The twangy, bluesy joint finds Allen wondering what kind of magic his lady love has worked on him. Something about her wiles has him jonesin' for her in the worst way, and the only way he can express it is over the organ-and-guitar-laced track, which is sure to be loved by fans of the blue-eyed soul singer.

Are you anxious for the deluxe re-release of Radius? If so, be sure to mark your calendars after you check out the clip for "Perfect World" and listen to "Voodoo" below.


TAGS:  Allen Stone
Previous: Morning Soul: This Is The Rhythm Of My Life Next: Kelly Price Glides Through A Reinvention With ‘Everytime (Grateful)’