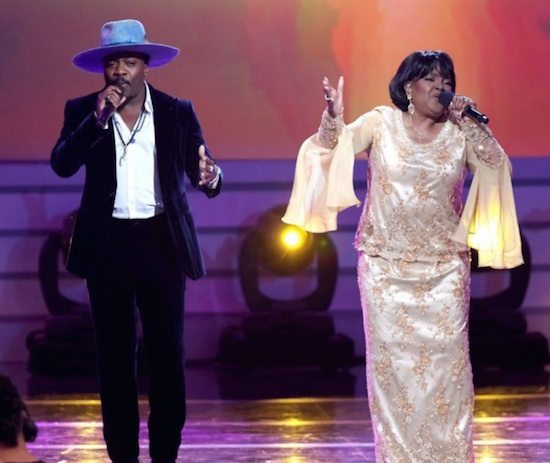 Though BET's Celebration of Gospel 2016 aired last night, we got a foretaste of one of the night's biggest moments when Shirley Caesar and Anthony Hamilton joined forces for her new single "It's Alright, It's OK." While we were definitely encouraged by the soulful sounds of the single, we weren't prepared for the anointing that would be given when the duo performed the song live onstage.

Pastor Caesar, decked out in a sparkling gold gown, led off the affair with her easily identifiable churchy vocals setting the tone for the night. She rocked the stage like only she can, pulling off a stately grace during her performance that is typically reserved for respected veterans of the craft. Soon, Anthony and his wide-brimmed hat strolled onto the stage to assist her. He seemed slightly subdued after his entrance, but soon warmed up as the song progressed. By the time the song got to its call and response section, the two vocalists were on fire, driving home the song and letting everyone in the audience know that as long as they kept their faith, everything would be alright.

While performances from Deitrick Haddon, Anthony Brown & Group Therapy and Tasha Cobbs may have come before and many more performances came after, Shirley and Anthony definitely set the standard for a stellar night of praise. Get into their faith-filled performance right here.