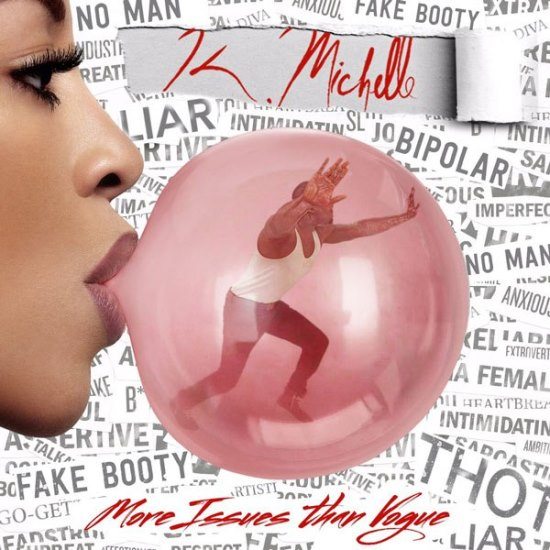 A few weeks ago, K. Michelle gave fans a taste of her new album with "Not a Little Bit," ahead of the second season premiere of her VH1 reality show K. Michelle: My Life. Apparently not content to leave the drama on the small screen, the outspoken artist almost took the focus away from her music with recent controversial remarks against blue-eyed soul artists as well as a petty Instafeud with her ex's ex.

Thankfully, the talented singer seems to have gained some clarity, closing a chapter from her past and proving that she's ready to move on. In addition to putting the finishing touches on the video for "Not A Little Bit," the rebellious soul has revealed her official album title – More Issues than Vogue (much better than what was previously rumored) – with a tracklist and pre-order information so we know it's real.

Unlike her previous albums, the cover art shows very little of the indiscreet songstress. Instead, we see a printed background filled with negative adjectives that have been attributed to her over the past few years, while she playfully blows a perfect pink bubble...with a man trapped inside. Undoubtedly, More Issues than Vogue promises another round soul-drenched drama as well as a glimpse into the singer's life. The album pre-order will be available this Friday, February 12th. In the meantime, keep up with K. Michelle's "issues" by following her on social media and tuning in to K. Michelle: My Life, Monday nights on VH1.


TAGS:  K. Michelle
Previous: SoundTable Discussion: SoulBounce Gets Into Beyoncé’s ‘Formation’ – Is It #PeakBlackness Or Nah? Next: Beyoncé To Start Her ‘Formation World Tour’ This Spring