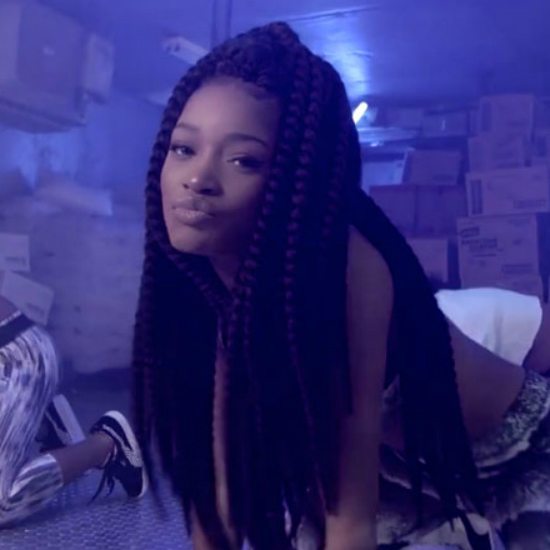 Actress, singer and all around bad gal Keke Palmer is back to add another title to her repertoire: dancer. The “I Don’t Belong To You” singer showed us she can move with the best of them back in October, giving us an exceptional tribute to Aaliyah for Halloween. Now she’s giving us fever with her interpretation of Rihanna’s "Work." She was recently seen vibing to the reference track to the song from PARTYNEXTDOOR and now we know why.

Apparently, while Rihanna and Drake were wining and grinding like nobody’s business up in The Real Jerk, Keke and company were relegated to the backroom freezer. However, that doesn’t stop the party. Keke keeps warm by doing her own dance routine. Decked out in a black and white tie-dye outfit, Patra braids and flanked by two dancers, Keke bounces, jiggles, shakes and body rolls across the metal floor. While Keke is technically flawless in her dance moves, there’s something missing. It’s as if she’s going through the motions and not really feeling it. She’s not giving it to us with reckless abandon like the dancers in Rihanna’s version.

And, while we don’t blame her for grabbing a bomb pop while she’s in the walk-in fridge, 'cause, s**t, might as well, it takes the sexy to almost skank levels. Yeah, we get it, you’re a child star trying to make people realize you’re a grown woman doing grown thangs, but part of being grown is knowing when, where and why to do certain things. That doesn’t take anything away from the multi-talented actress, singer and dancer who’s making a name on TV, in film and hopefully on the Billboard charts. We’re just waiting for her to find the right passion project that will launch her star into the stratosphere.