Kendrick Lamar Shuts Down The 58th GRAMMYs With An Iconic Performance 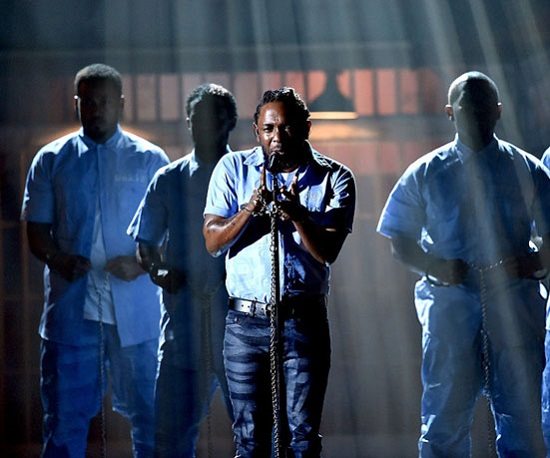 We knew that Kendrick Lamar's performance at this year's GRAMMY Awards was going to be big, but we had no idea what we were in for when K. Dot took the stage last night. The Compton representer, who won four GRAMMYs before the night's telecast and nabbed the Rap Album of the Year award at the top of the ceremony, has become known for his transcendent performances when it comes to his televised performances, and he didn't disappoint.

He kicked off his set dressed in prison blues and wearing chains as he marched in line with a few fellas also dressed like inmates as his band laid down a jazzy little melody. That soon broke into a charged rendition of "The Blacker the Berry," with Kendrick shedding his chains as the production ramped up accordingly, eventually breaking out into a full-on raucous celebration as the lights went out and Day-Glo colors were revealed on the prison uniforms and other dancers who joined the fray. From there, it was a quick switch to modern-day anthem "Alright," which was nominated for Record and Song of the Year honor at this year's ceremony, and a Motherland-inspired set, complete with a real bonfire and dancers dressed in garb inspired by different tribes in Africa. It was #PeakBlackness personified, but just when you didn't think it couldn't go any further, Kendrick took it there with a reveal of yet another untitled track to close out his set. As Kendrick blacked out on the mic, creative camera cuts and flashing lights glued your eyes to the TV screen before he ended the performance with a silhouette of Africa projected behind him with "Compton" proudly displayed in the center. Talk about powerful.

While some performances were damn good last night and others were less than remarkable, Kendrick's was the stuff of legend. Check out the iconic performance below.


TAGS:  kendrick lamar
Previous: Morning Soul: A Present From You, Strawberry Letter 22 Next: D’Angelo, Lalah Hathaway & The Weeknd Win Big In R&B At The 58th GRAMMYs