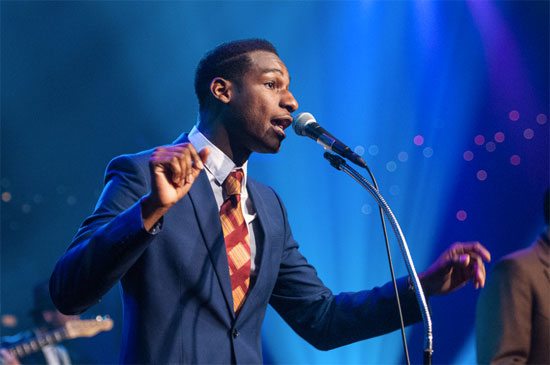 Bounce-Worthy favorite Leon Bridges is the musical gift that just keeps on giving. Not too long ago, Bridges blew us away with his performance on Saturday Night Live. And now, days after releasing the powerful music video for “River,” the singer and multi-instrumentalist graced the stage of PBS staple Austin City Limits to bless us with another live performance. Dressed in a blue blazer and khakis with his cherry red guitar strapped across his chest, Bridges looked like he stepped straight out of the 1950's after delivering a performance alongside classic soul men like Sam Cooke or Chuck Berry. His personal style so perfectly encapsulates and reflects his musical style and sound. Feeling at home and in his element in his native Texas, Bridges went on to entrance the crowd with live renditions of tracks from his debut album Coming Home.

Leon Bridges performed an entire concert for Austin City Limits and a few videos have surfaced online for fans to enjoy. He kicked his show off with current single "River," which set soulful tone and got the audience revved up. Songs such as “Better Man” followed that had the crowd up and on their feet as Bridges crooned about his woes about loosing a lover due to his poor choices. Bridges also performed the titular “Coming Home” and the finger-snapping, toe-tapping "Twistin' & Groovin.'"

Coming Home is a powerful, nostalgic album and a definitive debut that has propelled Leon Bridges to musical fame. If you'd like to get the Leon Bridges live experience for yourself, his U.S. tour starts next month with his first stops in Atlanta on March 1st and Nashville on March 2nd. While you wait for him to grace a stage near you, watch these Austin City Limits clips to see exactly why Leon Bridges is a legend in the making.