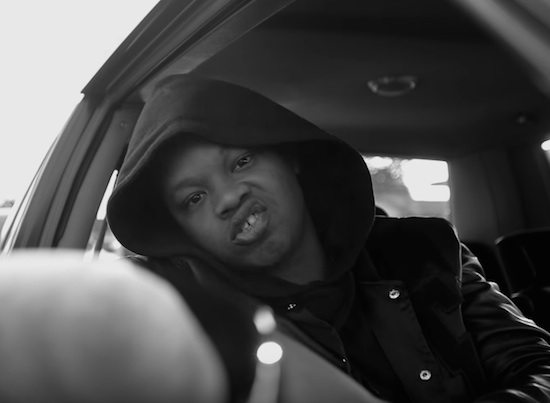 BJ The Chicago Kid's debut album In My Mind has finally dropped, and music lovers who've longed for their R&B with a little more soul and hip hop swagger are reveling in the music found on his debut release. BJ has a little bit of something for everyone on In My Mind, but something you won't find on there is the previously unreleased track "Oh My God," a collabo with TDE rapper Jay Rock. The track is featured, however, in the double music video entitled "A Day In My Mind," which begins with "Oh My God" and wraps with In My Mind track "Woman's World."

The black-and-white clip starts at 8 a.m. on a sunny day in Los Angeles. BJ is in the crib smoking a little herb, talking on the phone and looking out of the window watching the asphalt grow. He's soon picked up by Jay Rock and the music pauses while the two share a funny exchange about BJ coming up off of some gas money. The music kicks back in to provide the gritty soundtrack to the fellas riding round and getting it in Compton. After BJ gives a thorough warning to his haters to back down before they get smacked down, Jay rocks the mic with his verse along the same lines.

After laying down the law and driving around for a few hours, BJ gets dropped off at the next location in Leimert Park where he meets up with his band to rehearse "Woman's World" for the second half of the clip. The fellas practice on stage while BJ croons into the mic and reminds women that they run things. There isn't as much action in the latter portion of this music video, but you're better able to focus on the song and lyrics.

Get into BJ The Chicago Kid's "Oh My God"/"Woman's World" double feature and cop In My Mind from digital or brick and mortar retailers now.