The Weeknd Spices Up The Oscars With ‘Earned It’ 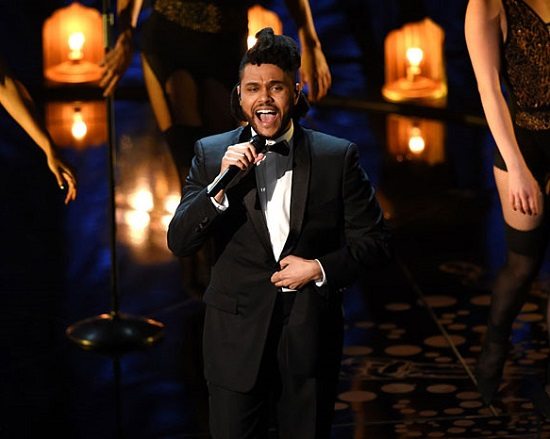 Though it might've been one of the whitest Oscars in recent years in terms of nominations, the program tried to shoehorn as much diversity into the overlong telecast as possible, including a scathing hosting job from Chris Rock. However, one of the sole Black nominees in the major categories was The Weeknd, who was nominated for Best Original Song for "Earned It" (which, if you didn't know was, was taken from the Fifty Shades Of Grey soundtrack). And while most of the song performers kept it rather staid and, well, boring, The Weeknd actually brought a little something interesting to the table.

His performance was essentially a recreation of the song's steamy video, right down to the strings and acrobatic performer dangling above the stage. As for Mr. Tesfaye, he stood center stage while a cadre of scantily clad vixens took all the risk as they danced around him in unison. He also didn't take any risks vocally, as well. While "Earned It" is pretty much made by The Weeknd sliding into falsetto at key moments, he kept things mainly safe, deciding not to even attempt to aim for the high notes. It was a disappointingly safe choice (though perhaps he was a little spooked by Sam Smith's disastrous showing while performing winning song "The Writing's On The Wall). But thanks to the staging and the lovely ladies making him look good, it was at least 10 times more interesting than any other performance on the stage that night.

Check out The Weeknd going for Oscar gold below.


TAGS:  chris rock", Sam Smith, The Weeknd
Previous: Morning Soul: Unplug The Phone, Girl, So We Won’t Be Disturbed Next: Jaheim Uses The Power Of Persuasion On ‘Be That Dude’