Anthony Hamilton Had The Ladies Of ‘The Real’ Saying ‘Amen’ 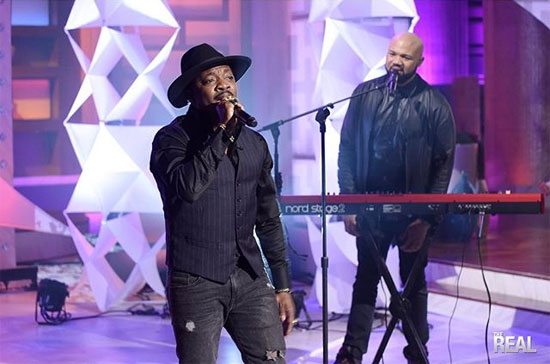 So far 2016 has been an amazing year of music for us at SBHQ -- and it's only March! One of the highlights thus far has surely been the release of Anthony Hamilton’s new single, “Amen,” from his forthcoming new album, What I’m Feelin', due this month and the announcement of his upcoming tour with Fantasia starting next month. Just when we thought it couldn’t get any better, Hamilton blessed our TV screens today with an appearance on The Real for the television premiere of "Amen."

The set was simple and missing most of his band members, but the performance lacked none of the signature sound and sexy soul that is Anthony Hamilton live. I already had some chicken baking in the oven, but once Anthony and two-thirds of The HamilTones started singing, red beans and rice, collard greens and cornbread magically appeared on the stove.

Loni Love was channeling my inner fan when she jumped off of her stool and rushed over to wrap Anthony in a congratulatory hug. The best part, though, was his response to her question about his recent visit to the White House. Anthony shared that President Barack Obama has “Float” on his playlist and queues it up when he wants a little alone time with FLOTUS. Or is that FLOAT-US?

Watch Anthony in action on The Real right here then scroll down to see a bonus live performance of "Float" from his tour rehearsal last year.

Behind the scenes: Rehearsing "Float", with my band.