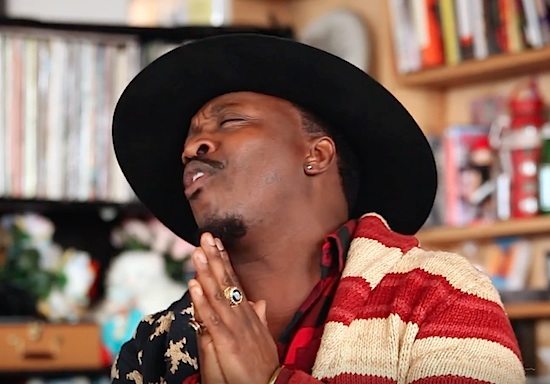 By now, every SoulBouncer reading this should have gotten their copy of Anthony Hamilton's What I'm Feelin' when it was released on Friday, March 25th. If you haven't scooped it up yet, then you are blocking your own blessing and missing out on some excellent soul and R&B from one of our favorite artists. In the event that you need another nudge to purchase Anthony's latest, then watching his live performance for NPR Music's Tiny Desk Concert series might just do the trick and have you clamoring to buy tickets to see Hamilton and Fantasia when they go on tour, too.

AHam stopped by the NPR offices when he was in Washington, D.C. in February to perform at the final In Performance at the White House series paying tribute to Ray Charles. After he wowed the White House, the following afternoon he tore down the Tiny Desk with some help from The HamilTones and members of his band. The fellas all squeezed into the cubicle-turned-performance space, and Anthony launched into "Amen" to set his set off.  The contemporary R&B track sounded even more soulful and harmonious live and served as the perfect warm-up for the classics from his catalog to come.

During the interlude between "Amen" and his next selection, Anthony shared who he was inspired by when he was crafting this track. "Let me write a song kinda like R. Kelly," he joked to a room full of applause before singing "Best of Me" and encouraging those in attendance to two-step. Following the stepper's groove came "Cool" and the heart-wrenching "Charlene" to close out the mini-concert and give a taste of the kind of sangin' you can expect at an Anthony Hamilton show. Until he hits the road with Fantasia this April, this NPR Tiny Desk Concert is a fulfilling appetizer before the meal, but it's definitely made us hungry for more of his home cooking.