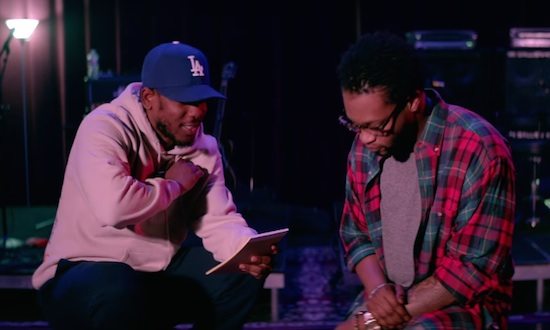 With talk of players, pimps and hoes permeating mainstream R&B, you'd be forgiven if you found yourself asking where the love is. Hell, even R&B not-so-newcomer BJ the Chicago Kid has asked the question and put it in song form with his latest single "The New Cupid." Now, he's bringing those thoughts to life with a hilarious video for the track that features its fair share of star power.

The clip follows both BJ as he crafts the track and Cupid (played by Chi-Town comedian Hannibal Buress). But there's something not quite right about this Cupid. For one, he's dressed like a smooth talkin' pimp straight out of 1972. Oh, and instead of bringing lovebirds together, he's hell-bent on tearing them apart by any means necessary. Whether it be sending floozies to the door of a happy couple, putting Kibbles 'N Bits in the home-cooked dinner of a man about to propose or...umm...relieving himself in a cold pitcher of lemonade one lady intends on giving her hard-working man, this Cupid's a little stupid. Luckily BJ and his famous friends, including iamSu!, Mila J, Raphael Saadiq and the song's featured guest Kendrick Lamar, have the cure for what ails the lovesick with a smooth groove reassuring us that despite Cupid's shortcomings, love is still alive and well.

Take a peek at BJ's latest comical visual and, if you haven't, scoop up In My Mind, which is in stores now.