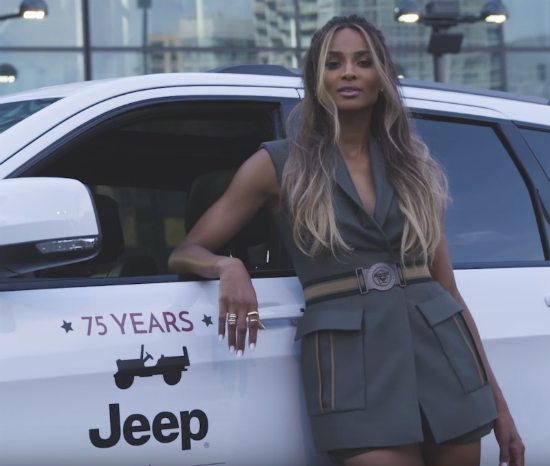 To help Jeep celebrate their 75th anniversary, songstress Ciara is singing their praises by sharing her affinity for the car brand. She doesn't actually sing in the commercial, but she does share her Jeep Wrangler story, which is related to her military dad and her start in the music industry. Dressed in a green Versace military vest and matching shorts, Ciara talks about her dad, who drove a Jeep during Desert Storm, and all of the many terrains he drove around. When the "Goodies" singer first started at the young age of 15, she would get a ride to the studio in a two-door Jeep Wrangler. She became obsessed with the brand and made it her first car, which she called Jolie (named after actress Angelina Jolie), to represent everything fierce, fly and edgy. If you haven't noticed, she's also had a few Jeeps in most of her music videos.

Ciara shot the video last week during a Jeep event at the Javits Center in Manhattan on Wednesday. While she's riding around and getting her coins, we haven't heard much from the songstress in terms of a new single. The singer is likely busy being a mom and planning her upcoming nuptials to Seattle Seahawks quarterback Russell Wilson, so we'll give her a pass. If Ciara's story reminds you of your Jeep love, you too can profess your obsession on the brand's website and by using #MyJeepStory on social media. Go for a ride down memory lane with Ciara when you watch her Jeep story right here.