Dwele Brings His Best To Baltimore To Close Out His Tour 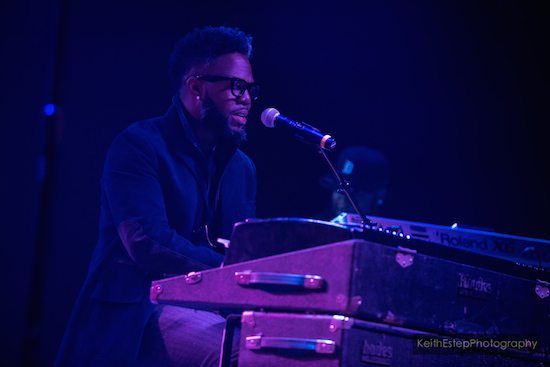 Dwele ended his most recent concert tour in Baltimore, and he went out like a champ. Baltimore Soundstage was the site for soul music fans to gather under one roof on Friday, March 18th to shake off the blues of the week and set their weekend off right, and Dwele made it happen.

After opener Kevin Jackson performed an unremarkable set, Dwele took to the stage a little after 9 p.m. and invigorated the audience immediately with his catchy 2005 hit "I Think I Love U." While singing this song, he also displayed his musicianship on the piano. Dwele continued to dig deep in his crates and reached back even further to sing "Truth" from his debut album Subject before bringing it to 2008's cheeky single "I'm Cheatin'."

Dwele continued to flaunt his musicality when he picked up the flugelhorn and played in perfect sync with his horn section on "Keep On." After giving the horn players some shine, he shared the spotlight with his background singer J. Tait on the track "Must Be." This love letter to the Motor City led the Detroit native to launch into a love fest about his city and shout out Slum Village and J Dilla. It just so happened to be Dilla Day in Baltimore and Dilla's mother, Ma Dukes, was in the city and surprised Dwele at his show. He joked, "No matter where I go, I could be in China, and Ma Dukes is there," and had the audience in stitches because she is definitely one to pop up when you least expect it.

More songs from all of Dwele's albums followed, including "Going Leaving" (Greater Than One), "A.N.G.E.L. (Interlude)" (Subject), "I Understand" (Wants, World, Women) and "Vain" (Sketches of a Man). These slower tempo, sensual numbers and purple mood lighting had the vibe inside Baltimore Soundstage feeling very sexy. Then Dwele decided to turn the heat up several notches by singing "the audio version of Fifty Shades of Grey," "Obey." He quipped about bringing someone's lady up on stage while he performed this song one night and her man ice grilling him from the front row the entire time. So to minimize the possibility of any bodily harm to himself, Dwele cut that part of his show out, but now invites a couple on stage to join him while he sings instead. He found two willing lovebirds in Baltimore who were all too happy to participate in some fully-clothed foreplay while Dwele serenaded them.

After that break for love, Dwele picked up the pace and introduced each member of the band. Following their solos, Dwele made his way down into the audience, and it was time to party. He performed "Swank" and "Takes22Tango" before serving up a tasty order of "Flap Jacks." Dwele walked all around the venue, singing, dancing and taking selfies with excited concertgoers. He had everyone on their feet and two-stepping by the time he performed his debut single "Find A Way" and "My Lova." After taking the audience on a nostalgic ride through his entire catalog, he hit us with one more oldie but goodie, Maze Featuring Frankie Beverly's "Joy and Pain," sung in various styles to bring the show to a rousing end.

It's evident that Dwele has put in work to switch things up and improve the experience of his live shows. He left this Baltimore audience satisfied with what they witnessed, yet still wanting more and ready to see him again whenever and wherever he appears in concert next. 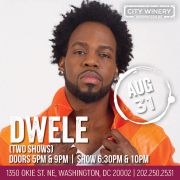