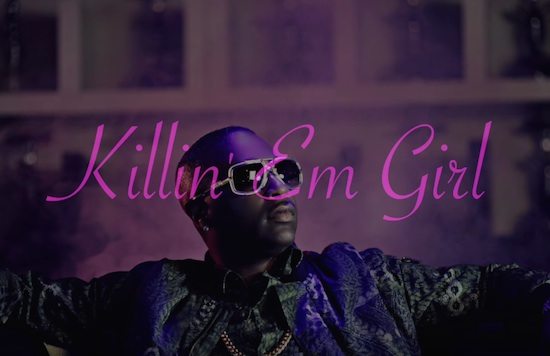 When R&B and hip hop collide, there’s plenty of room for collaboration, and on 112 member Slim’s latest solo single “Killin’ Em Girl,” he throws it back to their hip hop soul classic debut single that featured The Notorious B.I.G. by sampling him on this new track. Soulful, slithering and sexy, Slim takes time to express just how his crush caught his attention and praises her for killin’ every other female in the room by crooning, “Bet they wish they could be you for the night.”

The first track lifted from Slim’s upcoming album entitled Re-Fueled is also his first to be released on the Shanachie Entertainment label. “Killin’ Em Girl” doesn’t just speak from the perspective of the brother sitting quietly in the corner of the bar checking out the lady who just walked in and stole the whole show, but the new lyric video – perfect for Women’s History Month – displays Slim’s appreciation for some of the most beautiful women on the planet.

For starters, there’s one of the original Victoria’s Secret Angels, former supermodel-turned-businesswoman Tyra Banks, newcomer Tinashe, the baby-faced beauty Christina Milian and even newly engaged Ciara. You’ll spot the R&B darling Ameriie, iconic model Naomi Campbell and actresses Rosario Dawson, Sofia Vergara and Lupita Nyong'o. R&B’s frontrunners Beyoncé, Brandy and bad gal Rihanna also strike a pose. It turns out “Killin’ Em Girl” celebrates every kind of woman, so check it out to see how many of your favorites you can count in the lyric video while you learn the words.