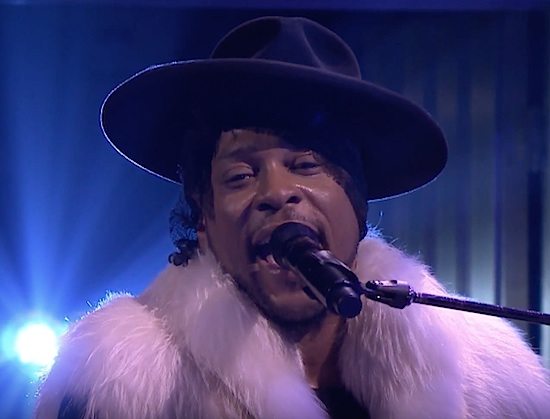 It's been a hard few days since the untimely loss of Prince, with many fans and friends dealing with the stages of grief in their own way. Being that there was no public memorial, it's been pretty hard for fans to have the sense of closure and finality that we had with the deaths of Michael Jackson and Whitney Houston. Perhaps that's why D'Angelo's appearance on last night's The Tonight Show Starring Jimmy Fallon seemed like such a cathartic moment.

D picked the appropriate "Sometimes It Snows In April," the elegiac album closer for 1986's Parade, which of course has a more significant meaning in light of recent events. Backed by Princess — the Prince tribute group consisting of Maya Rudolph and Gretchen Lieberum — draped in a white fur that would've made His Purpleness proud and bathed in purple light, D'Angelo did his best to to make it through the song's lyrics, about the death of a close of friend. But as tears fell from his eyes, he had to stop singing for a few notes and just let the somber piano speak for him. And just like him, we're sure many in the audience and at home were shedding a tear or two in memory of Prince and his immense talent.

While it's still so hard to believe that we've lost Prince so soon, we at least have the comfort that he inspired so many, like D'Angelo, and that his music will continue to inspire many more. If you happened to miss last night's tribute, grab some Kleenex and press play below.