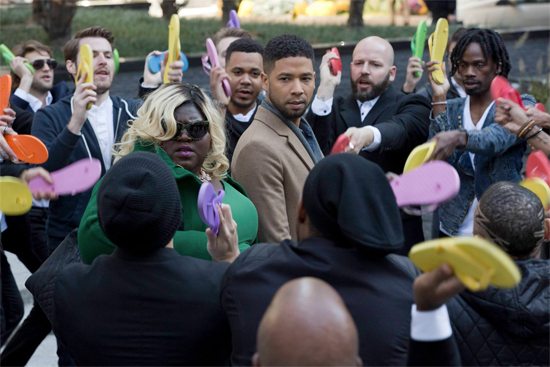 At Empire, Keemie and Camilla are discussing power moves, though Camilla is none to happy that Laura seems to be in the picture. Cookie, on the other hand, is trying to plan Tiana's world tour when Porscha and her sister Carol burst into a meeting for no reason whatsoever. Then in comes Jamal letting his mama know that Lucious is a snaky mofo (duh). And just when she thinks it can't get worse, here comes Andre again, bringing news that Camilla now wants to scrap Tiana's world tour (because why would you send your biggest pop star on the road to make money when you could be petty?). Luckily, this leads Cookie to a revelation after watching Tiana perform "Look But Don't Touch." She then finds Camilla at Empire's new fashion line (which is somehow already set up) to propose sending Mirage á Trois on tour with Tiana. Camilla, of course, licks her chops at getting rid of Laura and OKs the tour. That was easy.

At Leviticus, Jamal, who can't seem to have a single emotion without writing a song about it and then debuting it on stage, performs "Like My Daddy," in which he reveals that Lucious Lyon isn't even his dad's real name. And, as if that's a major revelation (many artists don't go by their actual names), he drops the mic and walks off stage. Lucious, however, is unfazed, as he calls that same nosy reporter back to his office to offer her the exclusive into his real story (what do you think the over-under is that this chick will come between LuLu and Cookie soon?). While Lucious is sitting pretty, Andre and Rhonda aren't doing to well. Andre's meds aren't doing their job and symptoms of his bipolar disorder are bleeding through, including a paranoia that has him doubting everyone and everything, including Rhonda's fidelity and Hakeem's loyalty. He has no need to doubt Hakeem though, as little bro comes through by going the Ray J route and filming a hot little tryst between he and Camilla — complete with a confession from the cougar that she's playing Mimi for her dollars — and sending it to the ailing Mrs. Whiteman once she arrives in New York to see what's going on with her investment.

His plan works, as Andre informs the crew that Mimi is dumping her Empire stock like it's going out of style and even uses his unborn son's trust fund to buy up the shares. This, of course, makes Andre act even crazier, but lends itself as the perfect segue to a sappy sad song that Hakeem and Jamal wrote just for him (it's actually not that bad...at least it wasn't until Hakeem starts rapping). Soon after, Cookie informs Lucious of their plan's success and says he's heading home. We're then suddenly shown Camilla frantically cleaning her fingerprints off of a faucet while Mimi's lifeless body lays at the bottom of a bubble-filled tub. (They couldn't even give Marissa Tomei a proper death scene? She's an Oscar winner for crying out loud!) She's suddenly interrupted by Lucious, whom we're convinced is the devil (he's always around when evil is being done) who informs Camilla that he caught her slipping the poison in Mimi's drink and gives her an option: she either drinks the same poison and he goes to the cops. Of course, he does this while holding her at gunpoint, so, of course, she chooses the poison. And just like that, Camilla is out of the picture, but not before Big Lu tells her to "rot in hell." And like that, Empire stuffs three or four episodes worth of plot into one hour.

Now that Camilla's gone and Empire is back in the hands of the Lyon clan, what happens next? Well, it seems they'll be celebrating Cookie's birthday according to next week's preview, and we all know that no drama can come from that, right?