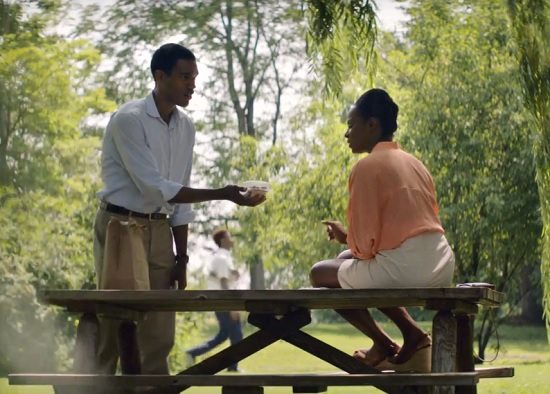 Picture it: Chicago in the summer of 1989. No, this isn't a story from The Golden Girl's Sofia Petrillo. Instead, it's the setting for the upcoming film Southside With You. The festival favorite tells the story of the enchanting first date of a couple you might recognize: Barack and Michelle Obama. Before he took the White House, Barack (played by Parker Sawyers) was just a lowly summer associate at a Chicago law firm where he met Michelle (Tika Sumpter), whose last name was Robinson then, who was his assigned mentor.

The film's trailer sets the story up quite nicely, with a soundtrack that starts with Janet Jackson's '89 classic "Miss You Much" and segues into Raphael Saadiq's "Love That Girl," as it shows a young Barack picking up Michelle for an outing (which she insists is not a date) during which the first sparks of love blossom. From picking her up in his rusted-out yellow Datsun to taking her to a community meeting in a church, it's easy to see how Barack's charm won over the career-minded Michelle and how meeting Michelle was a major upgrade for Barack. It also shows a rare glimpse of real life Black love flourishing. We'll definitely be picking up tickets at our local cineplex.

Southside With You, which is produced by John Legend, will arrive in theaters on August 19th. Peep the film's trailer below.