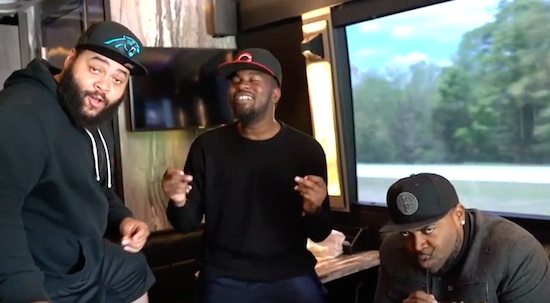 In case you've been missing the soulful, Southern fried and holy ghost baptized sounds of Anthony Hamilton's background singers The Hamiltones, then they are back with some fresh soul food and a tall glass of laughs to go with it. Instead of taking on a hip hop song and flipping it as they are known to do, the fellas took Birdman's monologue from his run-in last week with The Breakfast Club crew that's gone viral and turned it into a cappella and comedy gold with the song "Put Some Respeck On It."

While on the road with Anthony this past weekend on his joint tour with Fantasia, The Hamiltones decided to have a little fun on the tour bus. With Everyday LaVan's camera rolling, 2E, J.Vito and Tony Lelo flip Birdman's script and take lines from his angry speech to church but let everyone watching know that they mean bidness. Birdman's directive that Charlamagne Tha God, Angela Yee and DJ Envy "put some respeck on my name" has been the joke of the Internet since last Friday, but to hear The Hamiltones put their harmonies on it and turn it into a real song makes it that much funnier.

It's hard to believe, but the last time that we heard The Hamiltones switch up a track in their signature style was way back in December when they gave Rae Sremmurd's "Come Get Her" a churchy overhaul. They make up for keeping us waiting so long for something new with their instantly classic "Put Some Respeck On It." Here's to hoping that they break out into a live rendition of this while on the road with Anthony Hamilton -- and get him in on the act.

Watch The Hamiltones' "Put Some Respeck On It" and the shortest interview in The Breakfast Club's history right here for kicks and giggles.