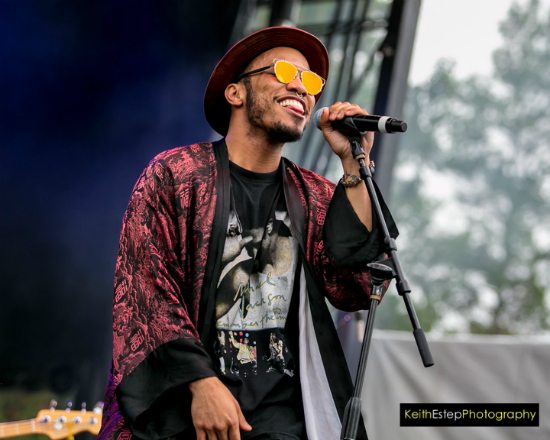 Plant a seed in the right city and you'll watch it grow and take on a life of its own. Such is the case with Washington, D.C.'s Broccoli City Festival, which drew crowds of funky millennials, cool kids and artists from across the country. In it's fourth year, the festival featured an indie and mainstream star-studded lineup designed to lure both the socially conscious and party-going trendsetters. While they showed up for the music, they also got a healthy serving of messages ranging from environmental sustainability, healthy-eating and going green. To reflect the assorted attendees, a mix of underground and mainstream artists like BJ the Chicago Kid, Anderson .Paak & The Free Nationals, The Internet, Sango, Jhené Aiko and Future joined the Broccoli City family.

While crowds showed up in droves to party at the Gateway DC Pavilion, the underlying purpose of the festival was to educate and enlighten, even encouraging concert-goers to forego ticket prices by instead volunteering their time. The result? 1,500 volunteers earned a ticket to the festival through their "Power of One" initiative, totaling in 4,250 total volunteer hours, 125 trees planted, 4500 meals prepared for the homeless, 475 bags of trash collected and more. Partnering with local D.C.-based organizations, the Broccoli City Festival sprouted kind hearts and acts across the city ahead of the much-anticipated musical gathering.

But what of the music you ask? When you got to the stage, a large audience partied to the Rock Creek Social Club's crew, including DJ Jerome Baker III and hosts Uncle Skooty and BET's Rodney Rikai. Once the crowd was warmed up, BJ the Chicago Kid kicked off the performances with his latest single "Turnin' Me Up." While he focused on tracks from his album In My Mind, BJ played up the festival's audience mixing in artist tributes. He sang a beautiful Prince tribute, serenading the hyper crowd with "Do Me Baby," which later transformed into Usher's "Nice N' Slow." Of course, he also performed a D'Angelo tribute but also gave a nod to The Jacksons with "Blame It On The Boogie." BJ even got on the drums a few times to show his musical prowess while the audience cheered him on.

Once Anderson .Paak & The Free Nationals got on stage, the audience was more than ready to keep the party going. The energetic singer waltzed onstage to his verse from Jonwayne's trippy single "Greenlight"  and transitioned into various tracks from Malibu. He delivered songs like "The Season/Carry Me" and "Milk N' Honey" with enough bass for the audience to get into whether they were familiar with the artist or not. After getting on the drums and doing his best body rolls, mid-set .Paak asked the crowd "Can I talk my sh*t?" Met with a resounding "yes," he kept the energy up, and so did his band, interrupting .Paak's set to play Vanessa Carlton’s "A Thousand Miles." .Paak capped his performance with his single "The Waters" and was joined by BJ the Chicago Kid, who fed off .Paak's unwavering energy.

Turning things down a notch, The Internet hopped on stage to spread their chill vibes across the festival. Starting out with "Dontcha," the crowd sang every word with vocalist and birthday girl Syd tha Kyd. The West coast group brought a little sun to the cloudy festival, singing other hits like "Just Sayin'/I Tried" and "Girl." Sango delivered a funky set, with appearances from DC-native GoldLink — who earlier gave Syd a portrait of herself as a birthday gift. By then, the smell of green in the air was just a little stronger but the audience stayed on their feet the entire set.

Jhené Aiko floated on stage in a colorful, sheer outfit as the evening came and so did more attendees. She sang hits from her album Souled Out, and the audience was ready for whatever Jhené was serving. The songstress even sang her famous line in "Post To Be" and remixed the track by turning it into a slow R&B ballad. Perhaps the audience was a tad bit confused at this point, but they were eating from her hand again when she performed tracks from Twenty88, her latest collaboration with rapper Big Sean. The singer even did a tribute to Prince, whose presence was felt throughout the festival. She sang a beautiful rendition of "Diamonds and Pearls" as the audience sang along, mourning the late icon.

With a minimal hip hop presence on the main stage, except between artist sets, the crowd — now battling the cold and drizzling rain — were steadfast in seeing headliner Future. When the artist finally came on (did we mention it was cold and raining?), he didn't waste any time to warm the crowd by performing hit after hit. From "I Thought It Was A Drought" to "Same Damn Time" and "March Madness," there was no shortage of hits from the Purple Reign artist.

Throughout the festival, we spotted various celebrities, including Robert Glasper, 9th Wonder, Lance Gross (and his amazing smile) and Sway. There was an abundance of music and melanin at this year's festival and we can't wait to see what the Broccoli City Festival team has in store for us next year. With plans to take Broccoli City across the country, it may be hard to transplant the same energy and amount of cool that resides in D.C. However, it makes all the sense for the festival to plant its seeds elsewhere as we continue to watch their green movement grow.