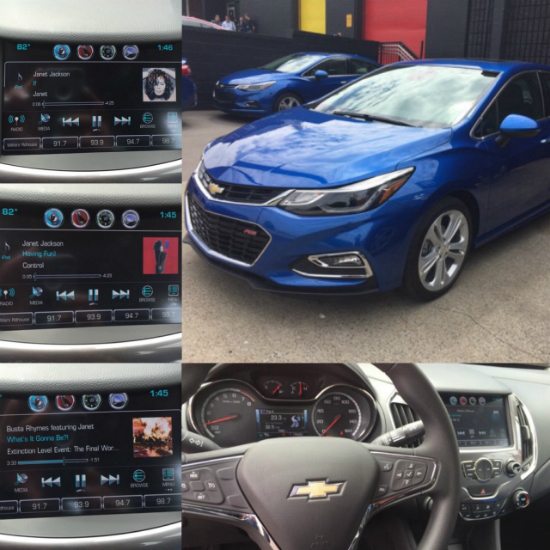 Day 2 of our Chevrolet Cruze experience brought drive routes through scenic neighborhoods and winding back-roads. We connected to Wi-Fi and streamed SoulBounce’s Top 30 Janet Jackson Singles playlist on Spotify. The opening guitar riff on “Black Cat” roared from the Bose speakers and we were off. The routes were pre-programmed into the OnStar navigation system, which made getting to each destination a breeze. One press of the touch screen and we quickly learned that this was not your old road-side assistance OnStar. The updated system features the RemoteLink mobile app and compatibility with Android Auto and Apple CarPlay using MyLink or voice command to safely interact with our music, messages, maps and apps in the same way that we would on our phones. It even runs monthly diagnostics to keep you in the know about important things like battery life, tire pressure and brake life. This is critical for music lovers who can’t afford to breakdown on the way to a concert or festival.

Chevrolet curated a number of amazing pit stops, and none of them were for gas. The Cruze gets 42 mpg highway, so we didn’t even have to think about it. We swapped vehicles throughout the ride and enjoyed all of the vivid exteriors and swaggy interiors our hearts desired. Our favorites were the Siren Red and Kinectic Blue with black interior and stitched leather.

Chevy saved the best stop for last, Jack White’s Third Man Records. Nashville, while best known as the home of country, gospel and contemporary Christian music, also has deep rock and roll roots. Elvis recorded more than 200 records at Studio B in Music Row and Detroit’s own Jack White is keeping it alive and well in Music City today. We enjoyed looking through the titles and wealth of music memorabilia at Third Man Records, but it was the rare and coveted behind-the-scenes tour of White’s nostalgic and eclectic digs, recording studio and live to acetate mixing and engineering room that gave us life. Oh, for the uninitiated, Jack White is that raspy voice and sonic boom on guitar on Beyoncé’s “Don’t Hurt Yourself” from the Lemonade album. Yeah, now you get it.

We were only in Nashville for about 24 hours, but it was a treat. We logged more than 100 miles on the road with uninterrupted connectivity even in the backwoods of middle Tennessee. SoulBounce put Chevrolet to the test using a tag-team approach with a driver plus a passenger who was happily DJing, tweeting, Instagram-ing and Facebook-ing while riding shotgun. We rate the 2016 Chevrolet Cruze as Bounce-Worthy with its seamless integration of the technologies we love, superior style and handling, fuel economy and user-friendly safety features.

Rarely does the average consumer get to meet the team of talented women and men behind award-winning brands and products. Well, SoulBounce’s 2016 Chevrolet Cruze Experience in Music City was just that. Around these parts, teamwork makes the dream work, so we can definitely relate.

Learn more about the all-new 2016 Chevrolet Cruze and how you can Find New Roads and Fuel Your Hustle on Chevrolet.com.