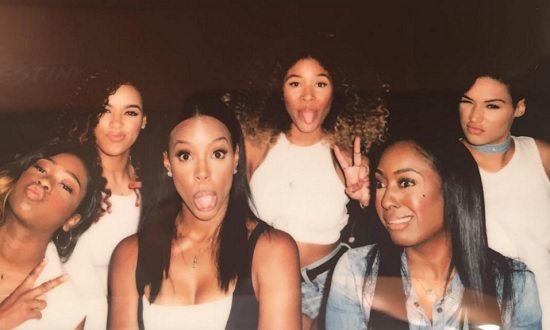 After weeks of auditions, rehearsals, tears and mini-drama, Kelly Rowland finally has her girl group. During this week's episode of BET's Chasing Destiny, five girls were chosen — Ashley, Brienna, Gabby, Kristal and Shyann — to take the world by storm with their beautiful vocals. To introduce their voices to the public at-large, the girls recorded a cover of Drake's "Hotline Bling" at the request of fans who loved it when they sang it on the series. From the beginning of the show, Kelly and Frank Gatson, Jr. have been obsessed with finding the perfect harmony, and if this a cappella track is any indication, it looks like they found the right blend.

They take on Drizzy's overly covered track, sprinkle it with some new flavor and create a soulful blend of vocals that grab you in the first 30 seconds. While the cover is a little less than two minutes, the singing quintet makes the song sound just a little less petty and a lot more loving.

Kelly did an interview this week on WCIU's You & Me show to introduce the group, and they even said "thank you" in harmony. Kelly is also working on a new album and recently released "Gimme Love," a single for Seagram's Escapes. We'll keep our eye on Kelly and her new group and an even bigger eye out for her new album. Until then, listen to the Chasing Destiny gals with their harmony-filled rendition of Drake's "Hotline Bling" and watch their very first interview right here.