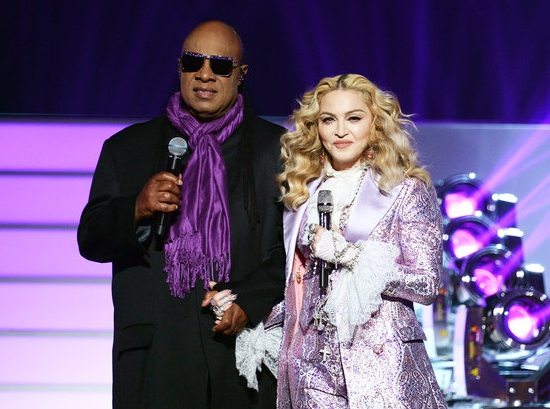 After weeks of internet chatter, petitions and a tone-deaf panelist on a talk show, it finally happened — Madonna performed her tribute to late icon Prince at last night's Billboard Music Awards. It was something that music lovers either anticipated or dreaded and that the awards show itself (which, if we're being honest, was probably one of the snooziest affairs so far this year) hyped to the umpteenth degree. So, was it the trainwreck everyone expected or was it a touching tribute to a fallen friend?

Well, yes on both accounts. The tribute began earnestly enough with Questlove introducing the set after comparing the loss of Prince to  an earthquake, a metaphor that appropriately described how shaken we all were when news of the legend's death spread throughout the world. Then the lights went purple and Prince's famous love symbol was projected on a screen center stage as the opening of "Let's Go Crazy" was played over the stadium's system. And then there was Madonna, sitting at a purple crushed velvet throne and rocking a metallic purple, paisley-printed suit as the the familiar strains of "Nothing Compares 2 U" began. And, well, it went about as well as one would expect. Madonna, who was visibly emotional as the song wore on, had her heart in the right place, but her vocals just weren't. For a song with such emotional heft, her singing just didn't cut it. Thankfully (and mercifully) she wrapped up the track and brought out Stevie Wonder to close the set with a sing-along take on "Purple Rain."

While we understand wanting to perform a somber song like "Nothing Compares 2 U" while marking something as tragic as death, this was not the song for the pop music royal to perform. We were hoping that maybe she chose one of his more upbeat numbers like "I Would Die 4 U" or even the aforementioned "Let's Go Crazy," hell, anything that didn't require Madge to struggle through eight minutes of a slow, emotional ballad. Twitter definitely wasn't here for it and BET even took the time throw a not-so-subtle dig. Hopefully they live up to their promise and give us the tribute that we all know Prince deserves during next month's BET Awards.


TAGS:  madonna, prince, questlove, stevie wonder
Previous: Morning Soul: Is There Any Boys Around That Know How To Make A Girl Feel Next: Adele Reveals Her Many Layers In ‘Send My Love (To Your New Lover)’