The Internet Stops By ‘Bandmates’ For Some Fun & Games 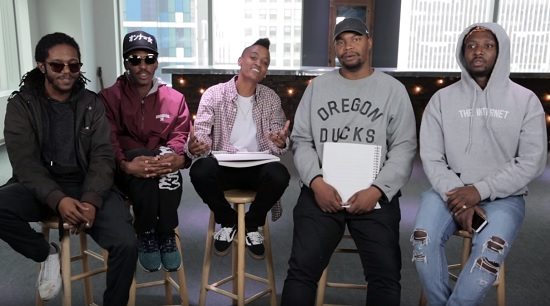 After dropping one of our favorite albums of 2015 and earning themselves a well-deserved GRAMMY nom, The Internet continues to impress us in unexpected ways (like an unearthed "b-side" from the vault, a groovy cover, a triple-whammy video, not to mention incredible live performances at festivals like Broccoli City and Art of Cool). Refusing to be confined by stereotypical expectations, the incredibly talented crew embraces free thought and isn't afraid to push the limits. But still, their most recent adventure is something we didn't see coming.

Syd tha Kyd, Matt Martians, Patrick Paige, Christopher A. Smith and Jameel Bruner (Steve Lacy was absent) came together for Vevo's Bandmates, a cool spin on the game show classic The Newlywed Game. Split into two teams, the band took turns answering questions about founding members Syd and Matt. With questions running the gamut from "Song You Wish You Wrote?" to "Favorite Drink?," the offbeat clip offers a candid and hilarious peek into their group dynamic.

Peep the video below to find out whether Team Syd or Team Matt reigns supreme. The short clip is all in good fun, but if you're looking for something a little more meaty, scroll down for their recent interview with Peter Rosenberg for his Real Late segment on Hot 97. If you prefer to see the band live, doing what they do best, in addition to summer festivals like ESSENCE and AFROPUNK Brooklyn, the crew will be heading overseas for a month-long tour July through August. Be sure to check their website for all of their upcoming tour dates.