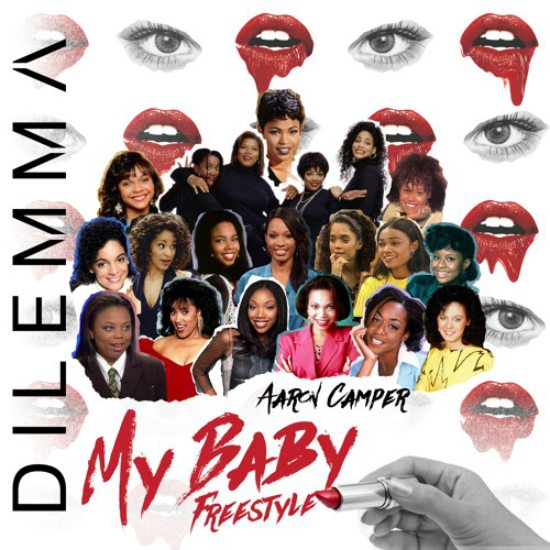 Since it's Woman Crush Wednesday, it's the perfect time to press play on Aaron Camper and DJ Dilemma's newish track "My Baby." An ode to their favorite TV crushes, the single sounds like an old school party with new school production. According to DJ Dilemma's SoundCloud, they conjured up the track while on tour in Texas and King Logan, Daniel Jones and Cleon joined in to round out the production. The collective decide to use Stro Elliott's "James Baby," which samples James Brown's "I Got the Feelin'" ('80s babies probably remember the song most from the iconic living room scene in The Cosby Show), as the base for the song. Aaron sings about the beautiful ladies over the carefully blended samples, using modern lyrics such as "she like Curry at the free throw" to go along with the nostalgic horns and call and response that decorate the background.

The song's artwork, designed by Neemz Nurse, features actresses from the '80s and '90s we all grew up crushing on. Aaron Camper's B.L.O.W. is still scheduled to drop this year, and he's whet our appetites with the tracks "Sunset" and "Guns And Roses," while we patiently wait for its release. Listen to the latest from Aaron, DJ Dilemma and friends below and think about your bae-by when you download the track over on SoundCloud and do your two-step.